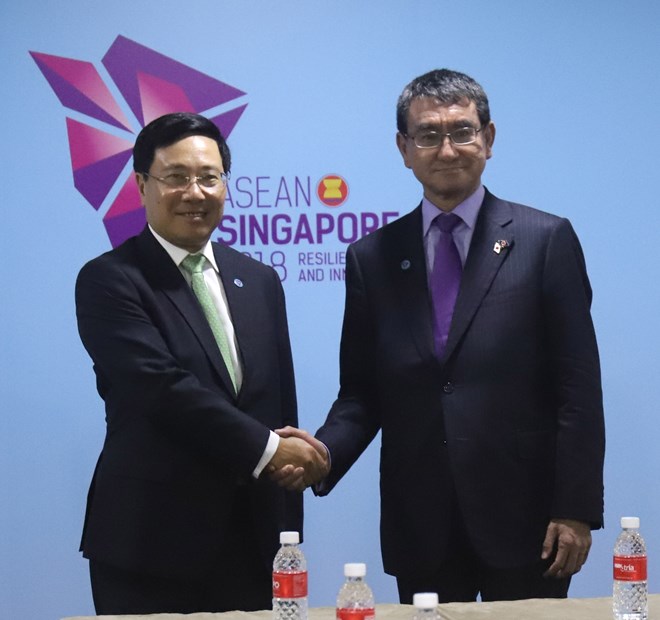 The events took place on the sidelines of the 51st ASEAN Foreign Ministers’ Meeting and related meeting in Singapore.

Talking to Taro Kono, Deputy PM Minh thanked the Japanese Foreign Ministry for its coordination to successfully organise Vietnamese leaders’ trips to Japan recently, especially a State visit by President Tran Dai Quang. He and the Japanese official agreed that the two sides will continue working closely to realise the outcomes of those high-ranking visits.

He noted as the coordinator of ASEAN-Japan relations from this August, Vietnam will strongly work with the Northeast Asian nation to promote the substantive and effective development of ASEAN-Japan ties.

Minister Kono thanked leaders of the Vietnamese Party and State for expressing sympathies on Japanese people’s losses in recent natural disasters. He stressed that the Mekong-Japan Summit, slated for October this year, will help promote cooperation and people-to-people exchange in the region.

In terms of regional issues, the officials voiced concerns about the complex developments in the East Sea, underlining the importance of maintaining peace, stability, security, safety and freedom of navigation and aviation in the East Sea, as well as denuclearising the Korean Peninsula.

At his meeting with the Iranian Foreign Minister, Deputy PM Minh affirmed that Vietnam treasures the time-tested friendship with Iran, asking both sides to work together more closely to carry out the outcomes of recent high-level visits.

He also called on Iran to create more favourable conditions for major enterprises of Vietnam like Viettel and PetroVietnam to invest and do business in the country.

At the meeting, the two sides also agreed to strengthen partnership in energy, oil and gas, and banking to help soon raise bilateral trade to 2 billion USD. 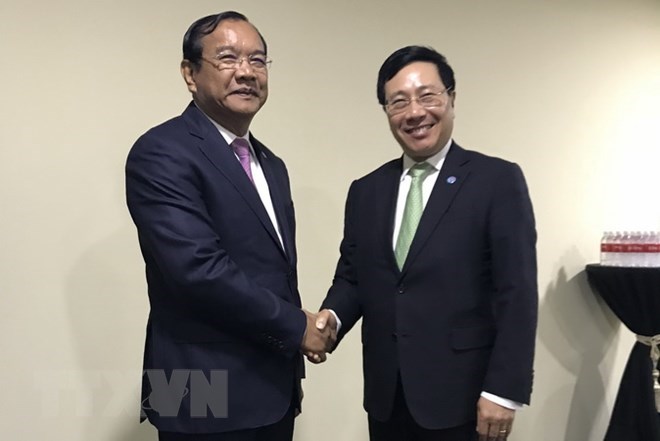 Vietnamese Deputy Prime Minister and Foreign Minister Pham Binh Minh met with the foreign ministers of Cambodia and Norway on August 2 on the sidelines of the 51st ASEAN Foreign Ministers’ Meeting in Singapore.

Meeting with Cambodian Minister of Foreign Affairs and International Cooperation Prak Sokhonn, Deputy PM Minh congratulated Cambodia on the successful organisation of the election of the sixth parliament, saying that the good initial results reflected voters’ trust in the leadership of the Cambodian People’s Party.

He voiced his belief that the sound neighbourliness, traditional friendship and comprehensive cooperation between Vietnam and Cambodia will develop more strongly in the future.

The two officials agreed to work together to prepare for high-ranking visits and bilateral cooperation mechanisms later this year, including a meeting on border provinces’ cooperation and a political consultation between the two foreign ministries.

They also affirmed the determination to implement cooperation projects effectively and on schedule, and speed up land border demarcation and marker planting in order to build border areas of peace, stability, cooperation and development.

Regarding the East Sea issue, both sides agreed on the need to accelerate negotiations to soon reach a substantive and effective Code of Conduct in the East Sea, thus contributing to peace, stability and development in the region and the world.

At his meeting with Norwegian Foreign Minister Eriksen Søreide, the Vietnamese Deputy PM called on the two countries to increase delegation exchanges at all levels. He affirmed that Vietnam encourages Norwegian companies to invest in marine economic sectors, shipbuilding, oil and gas, aquaculture and renewable energy in Vietnam.

He asked Norway to keep promoting the talks on a free trade agreement between Vietnam and the European Free Trade Association.

Valuing the European country’s role as a sectoral dialogue partner of ASEAN, he hoped that Norway will continue supporting the bloc’s central role and further assist development in the CLMV nations (Cambodia, Laos, Myanmar and Vietnam).

Minister Søreide said Vietnam is an important partner in ASEAN of her country, adding that more and more Norwegian businesses are showing interest in the region, including Vietnam. Norway will also strengthen cooperation with Vietnam both bilaterally and multilaterally at regional and international forums. –VNA