VietNamNet Bridge – South Korean goods, following the South Korean culture, have been flocking to Vietnam. Experts have warned that the “South Korean wave” would make the trade deficit more serious.

VietNamNet Bridge – South Korean goods, following the South Korean culture, have been flocking to Vietnam. Experts have warned that the “South Korean wave” would make the trade deficit more serious. 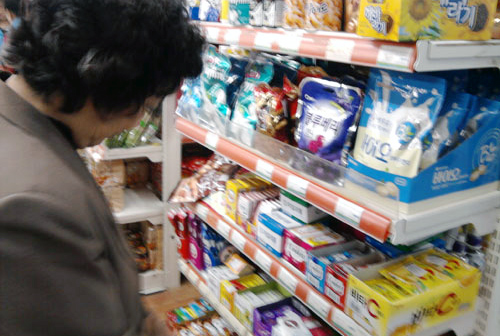 The Korean style on Vietnamese market

It is now very easy to buy South Korean goods in Hanoi. The imports from South Korea have been available not only at the shops on big streets, but also at supermarkets or shopping malls. A wide range of products can be found there, from delicacy to households products.

Vietnamese now favor South Korean goods, which are much better in quality than Chinese, and not as expensive as Japanese.

Hundreds of product items, from footwear, cosmetics, sweets, instant noodle to washing liquid, drinks and umbrella, are available at a shop on Pham Ngoc Thach Street in Dong Da district, though it covers a small area of 20 square meters only.

Nguyen Ngoc Anh, a loyal customer of the shop, said she favors South Korean goods, especially cosmetics. “In the past, I asked my relatives in Korea to buy cosmetics and send to Vietnam to me. However, I don’t have to ask for their help any more, because South Korean goods are available everywhere,” she said.

Nguyen Thi Nam in Cau Giay district said 70 percent of the household goods at her home are made in South Korea.

The owner of a South Korean goods shop said at first, the shop mostly received South Korean people living and working in Vietnam. However, the majority of buyers now are Vietnamese.

Having had five shops in Hanoi so far, she plans to open more retail points in Hanoi.

“The market is large enough because the Vietnamese income and living standard have improved. South Korean goods have become affordable to more Vietnamese,” she noted. “Meanwhile, a lot of South Korean industrial products are suitable to Vietnamese, from cosmetics to food, from machines to household appliances.

“You may know that South Korean blankets, sheets, pillows, cushions, clothing, cosmetics can be sold in rural areas as well,” she added.

The danger from trade deficit

A report from the Ministry of Industry and Trade showed that the two-way trade turnover between Vietnam and South Korea has increased by 42 times over the last 10 years, from $0.5 billion in 1992 to $21 billion in 2012.

In the first 10 months of 2013 alone, the figure reached $23 billion, a sharp increase of 32 percent over the same period of the last year.

South Korea is now the fourth biggest trade partner of Vietnam, while Vietnam is the sixth biggest export market for South Korea.

While Vietnam exports $5.5 billion worth of products just to South Korea, it imports $15.5 billion from the country. As such, Vietnam’s excess of imports over exports in the trade with South Korea is $10 billion and the trade deficit ratio is 179 percent.

The trade deficit with South Korea is lower in value in comparison with that with China, but higher in ratio (the figures were $19.7 billion and 186 percent in the first 10 months of the year).