Covid-19 has led to a sharp increase in the demand for essential goods.

Masan, the producer of instant noodles, processed meat, spices and drinks, is running its factories at maximum capacity. 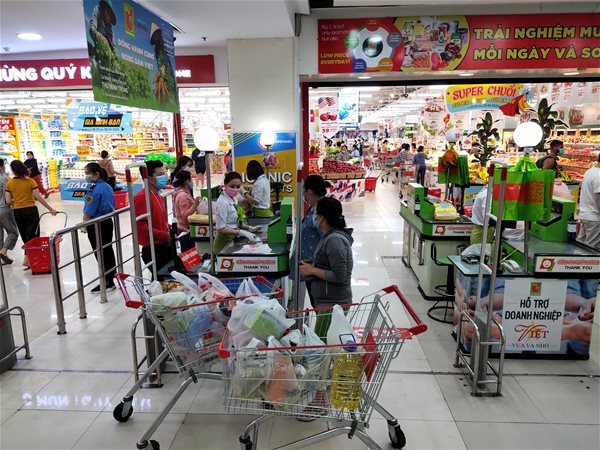 “We have geared up to provide products to satisfy the basic needs of people,” a representative of Masan said.

Earlier, at a meeting between Deputy PM Trinh Dinh Dung and pig husbandry enterprises, Masan reported that the demand for MEATDeli chilled meat in third week of March increased by 4-5 times, but could only satisfy one-quarter of demand.

Le Thi Thanh Lam, deputy general director of Sai Gon Food, confirmed that the number of orders has increased sharply since the beginning of February.

The number of orders from Japan is twice as much as the same period last year, but Sai Gon Food can only satisfy 20 percent of the additional demand, because it has to gather strength on satisfying domestic orders.

As for the domestic market, the number of orders has also increased by two times, especially ones for frozen products and ready-made meals.

As the number of orders increases too rapidly, Sai Gon Food is meeting some difficulties: the expenses on some input materials have increased and the production cost has risen as well because workers have to work extra hours.

Nguyen Thanh Trung, director of Que Lam Organic Farm Produce, said the cost Que Lam has to pay to distribute goods in peak period is very high. After the 17th patient was discovered, the company had two days to carry rice from Hue to Hanoi to satisfy the demand.

“We have to hire more workers and use transport services instead of our car,” Trung said. “The retail turnover increased by two fold but the distribution cost has increased sharply."

Tran Quan, the founder of Soi Bien restaurant chain, which has 30 shops and 5 pig farms in Hanoi, noted that fresh food suppliers will face difficulties because of demand fluctuations.

Demand soars on some days, but later drops significantly, depending on the epidemic situation.

According to Nguyen Hong Nhan from Tien Giang Food, rice demand from people has increased by 20-30 percent as people buy rice for storage, thus helping the company toboost sales.

“So, the demand has increased, but not too sharply as predicted,” he said.

Dang Thi Lien, director of Long An Food & Foodstuff, said the rice demand has increased as people store rice to prepare for social distancing, but this is just temporary.