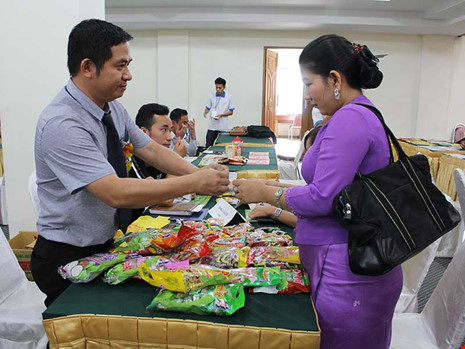 The establishment of the AEC (ASEAN Economic Community) market with 600 million consumers was expected to bring great opportunities for Vietnamese exports.

However, a report from the General Department of Customs (GDC) shows that in the first eight months of the year, after AEC took effect, Vietnam’s export turnover to ASEAN decreased by 10 percent compared with the same period last year.

Meanwhile, goods from other AEC countries have been flowing to Vietnam.

Minh Anh, a housewife in Go Vap district in HCM City, who has just returned from a trip to Thailand, noted that it was not easy to find Vietnamese goods in Thailand, but  Thai goods could be found in Vietnam.

Nguyen Van Khanh, secretary general of the Vietnam Leather & Footwear Association, commented that Vietnamese enterprises have been competing fiercely with Chinese products for many years. But now, Thailand is the strongest rival of Vietnam.

Also according to Khanh, the domestic market has been weak this year with the demand down by 30 percent.

Meanwhile, Vietnam’s exports to Cambodia also fell by 30-40 percent because the country has strengthened imports from China and Thailand.

The company has exported its products to countries such as the Philippines, Singapore, Malaysia and Cambodia, but now has to compete fiercely with Thai products.

“Thai goods have selling prices lower than Vietnamese thanks to a transparent mechanism and clear expenses on shipping and administrative procedures,” he said, adding that Vietnamese businesses are meeting difficulties in this field.

Under current regulations, food hygiene is being controlled by three ministries – the Ministries of Industry & Trade, Healthcare and Agriculture & Rural Development.

Hung knows some businesses that could not find partners to act as distributors in foreign countries, though they have been implementing trade-promotion programs for years. It is very difficult for Vietnamese businesses to consume their products overseas without their distribution networks.

Vietnamese experts have repeatedly warned that Vietnam may become a ‘depression’ area for AEC’s goods to flow to.

Le Dang Doanh, a renowned economist, said a 10 percent decrease in exports to ASEAN and an increase in trade deficit shows the weak competitiveness of Vietnamese enterprises.