Stunned by a series of child abuse cases discovered recently, parents are registering abuse prevention training courses for their children.

The classes that teach skills to prevent child abuse became overloaded within a short time after the former Deputy Head of the Da Nang Procuracy was found sexually abusing a girl in a lift at Galaxy 9, a residential quarter in district 4, HCM City. 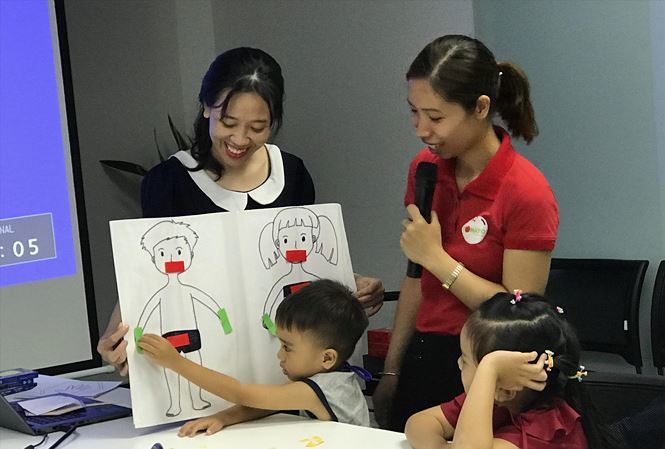 Luong Thi Nguyen Thao in Phu Nhuan district, the mother of twins, said she has decided to send the children to a life skill class.

“Previously, I thought that it is too early for them to learn abuse prevention skills at the age of 5 because they may not understand the lessons. However, I am convinced that such lessons need to be provided very soon,” Thao said.

Her husband agrees with her that children need the skills to protect themselves before they can get support from adults.

“I feel worried as so many child abuse cases have been discovered recently,” he said.

“We talk to our son every day about how to protect themselves. However, we still feel worried about the risks. We decided to bring him to a class. The teachers there are professional and skills are taught in a scientific way,” he explained.

Asked if he thinks the risks are higher for girls than for boys, Hieu said that child abuse may happen with both girls and boys.

“Other parents also understand this. Nearly half of the children in my son’s class are boys,” he said.

A class teaching children to protect themselves from abuse, of 1,000 children, has opened at Hoang Phap Pagoda in Hoc Mon district, HCM City.

In the class, experts introduce ‘No Go Tell’, a method applied for children to prevent abuse. No Go Tell teaches children to say ‘no’ to strangers who attempt to touch them, run away to safe places, and tell trustworthy people about what happened and ask for support.

According to Nguyen Thi Hong Tuyen from Tomato Children Home, the program written by an US organization has been adapted by Tomato for use in the Vietnamese community for the last six years.

Nguyen Thuy Uyen Phuong, a child psychology education specialist, said parents should also be taught what they need to do in case their children are hurt physically.

Covering up child sex abuse is as low as it gets