VietNamNet Bridge – Only several overseas Vietnamese scientists and lecturers have been given the titles of professors or associate professors so far.

VietNamNet Bridge – Only several overseas Vietnamese scientists and lecturers have been given the titles of professors or associate professors so far. 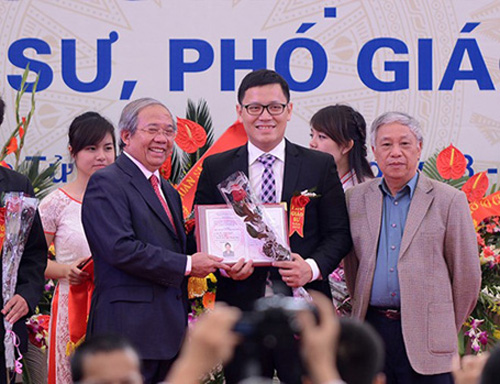 The ceremony on granting the professorship to 500 lecturers took place on November 18, 2013, at Van Mieu Quoc Tu Giam the Temple of Literature – Imperial Academy, considered the first university in Vietnam.

Vietnam began granting the professorship in 2000 as the recognition of the lecturers’ big achievements and contribution to the country’s education and scientific development. It deserves to be a very important event.

However, as reported by Song Moi newspaper, the ceremony caught the public attention not because of the fame of the newly appointed professors, but just because of the traffic jam on the street at that time.

While hundreds of newly appointed professors and associate professors felt happy with rejoice at the ceremony, hundreds of people struggled hard to find their way in the traffic congestion.

The professorship title seems to be too familiar to Vietnamese. It is the country which has the highest number of doctors in the region and has the lowest number of scientific research works. While Vietnam has the most professors and PhDs in South East Asia, no Vietnamese university has been listed in the world’s top 500 universities.

What also caught the people’s special attention at that moment was the news that a PhD took legal proceedings against the Minister of Education and Training for his decision on revoking his doctorate in a suspected plagiarism case.

Song Moi commented that the Vietnamese professorship title still does not have the “international stature” as it cannot attract overseas Vietnamese intellectuals.

Only several overseas Vietnamese scientists, namely Ngo Bao Chau, Tran Hai Anh, Vu Ha Van, Nguyen Ngoc Thanh, have been granted the professorship title over the last 10 years. They have been well known as the scientists who have been devoting themselves to the Vietnamese science development.

No name of overseas Vietnamese scientists was called at the ceremony on granting the professorship on November 18, 2013.

Tran Van Nhung, Secretary General of the State’s Professorship Council, admitted that there are not many “special candidates”, i.e. the Vietnamese working overseas, for the professorship

Nhung said the State’s Professorship Council not only aims to attract domestic scientists, but also the Vietnamese working and living overseas who want to devote themselves to the homeland. The information about professorship has been popularized on professorship council’s website in both Vietnamese and English versions.

However, though the community of overseas Vietnamese scientists is very large, not many of them care about the Vietnamese professorship. Nhung said the problem is that Vietnam still does not have reasonable policies to attract the talents.

He went on to say that the overseas Vietnamese professors cannot see any benefits from the professorship title. In order to attract more talented overseas Vietnamese, it is necessary to clarify where the talents will work if they return to Vietnam, what working and living conditions Vietnam would offer to them, how much to pay the scientists…