VietNamNet Bridge – While the government has stated that it does not intend to lower economic growth targets, economists have warned that the public should be prepared for an unsatisfactory economic performance in 2014.

VietNamNet Bridge – While the government has stated that it does not intend to lower economic growth targets, economists have warned that the public should be prepared for an unsatisfactory economic performance in 2014. 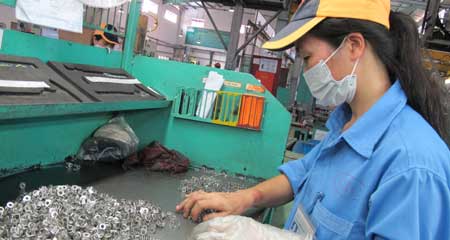 Admitting that the Chinese deployment of the oil rig in the East Sea has had negative impacts on the national economy, the government has stated that it will not adjust the economic growth targets for 2014.

This shows that the government is optimistic about the recovery this year from the economic downturn.

“The economy witnessed active signs of recovery in the first five months of the year. Though Vietnam is facing some difficulties due to East Sea tensions, the Prime Minister has vowed not to let the difficulties affect economic development in 2014,” said Nguyen Van Nen, chair of the government office at a press conference several days ago.

Nen said the measures taken by the government to minimize the negative impacts on the Vietnam’s economy had shown initial results.

Enterprises have been given necessary support to maintain their normal production and business plans.

He also said that Vietnam still can control the foreign exchange, gold and commodity markets. They remain an attractive destination for foreign investors.

Big national economic programs, including state-owned enterprise equitization, has been going on the right track.

However, economists have warned that the Vietnamese should “face facts” rather than “keep unfounded optimism”.

VEPR, the Vietnam Economic Policy Research Center, in its sixth annual economic report, predicted that the GDP growth rate of Vietnam would be 4.88 percent in 2014 at maximum and the inflation rate would be 5.51 percent. In the worst-case scenario, the figures would be 4.15 percent and 4.76 percent, respectively.

The predicted levels are all far below the levels expected by the National Assembly, which are less than 7 percent inflation and 5.8 percent GDP growth rate.

The modest GDP growth rate predicted by VEPR has stunned not only government officials but other economists as well.

Tran Dinh Thien, director of the Vietnam Economics Institute, commented that the economic picture drawn by VEPR had a “grey color”, although he did not say if this was an accurate appraisal.

Even the World Bank, which warned that Vietnam’s GDP growth rate in 2014 would be “modest”, is not as pessimistic as VEPR.

In a report released on April 7, it predicted that Vietnam’s GDP growth rate would be 5.5 percent this year.

If the VEPR’s prediction comes true, Vietnam could see the lowest GDP growth rate this year in the last 14 years.

According to Vu Viet Ngoan, a well-known economist and National Assembly deputy, analysts believe that Vietnam needs an annual 6 percent growth rate at minimum to be able to obtain other socio-economic targets.

However, the reports by domestic and international institutions all have affirmed that the growth rate target cannot be attained.

In fact, VEPR said its pessimistic predictions were not just based on tensions in the East Sea. Besides external problems, Vietnam is also facing many internal problems that are hindering economic development.