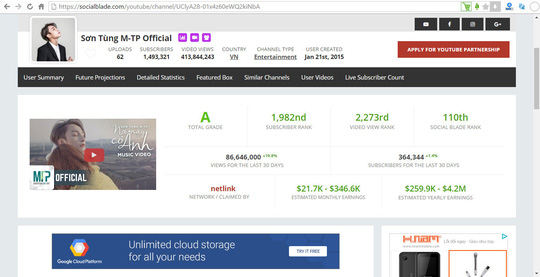 Young people have been shocked by the high number of video views on YouTube and subscribers that Son Tung M-TP, a Vietnamese singer, has received. They have questioned how much Son Tung can earn from such a high number of viewers.

Socialblade, a tool which watches the development YouTube channels on Google’s online video network, showed that Son Tung M-TP Official channel ranks 1982nd in the globe in the number of subscribers. It is an A-class channel with the number of views ranking it as the 2273rd among the channels on YouTube.

T.H.Minh, the student of a technology university in HCMC, said he can earn several hundreds of dollars a month from YouTube.

Two years ago, when hearing that YouTube paid for the posted video clips, he began opening a channel of his own, where he posts clips with introductions about new games and playing tricks.

After one year, the figure increased to tens of thousands and there are 50,000 subscribers. Minh believes that the job is not too busy, while it brings him VND10-20 million a month.

Analysts said that watching videos online has become a habit for many Vietnamese, leading to the establishment of a community of people developing content for YouTube.

According to Marketing Online, when becoming YouTube Partner, videos can become effective tools to earn money as ads will be automatically inserted with pay of $1 per 1,000 viewers.

The representative of the HCMC-based Digital Marketing DGM, which trains people in how to make money from YouTube, said that it is not difficult for those who have knowledge and passion to earn money from YouTube.

The company’s clients are diverse, from office workers who like sharing views and news with friends to housewives who want to share the methods for health care on their channels.

The second method attracts viewers quickly, but this is not a long-term way to make money.