The mission of Vietnamese diplomacy in 2018 is to continue maintaining an environment of peace, stability and cooperation to ensure Vietnam’s security and development goals.

The mission of Vietnamese diplomacy in 2018 is to continue maintaining an environment of peace, stability and cooperation to ensure Vietnam’s security and development goals. 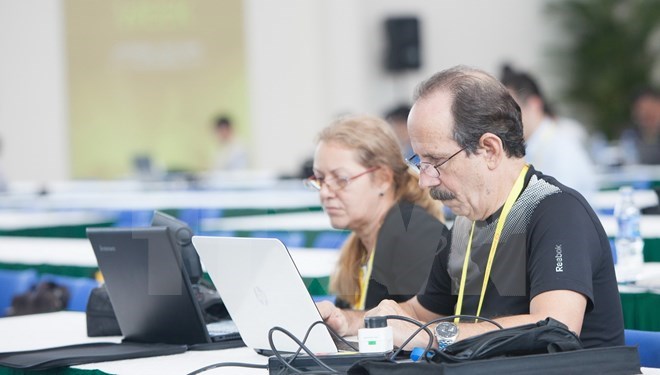 The statement was made by Deputy Foreign Minister Ha Kim Ngoc at the ministry’s New Year reception with representatives of foreign diplomatic missions and foreign correspondents in Vietnam in Hanoi on January 11.

Ngoc said that together with this mission, Vietnam will work to contribute to the maintenance of peace, stability, cooperation and development in the region and the world.

“In this process, we will face not only favourable conditions but also significant challenges. Indeed we cannot fulfill these tasks without the support of the international and regional community, of which you are an important part,” he told around 70 foreign Ambassadors, head representatives, cultural and press attachés, along with 50 foreign correspondents and press assistants at the event.

He hailed the important role of foreign media and press in connecting Vietnam to the world, providing the world with an insight into Vietnam’s situation and contributing to bringing nations closer together.

Looking back on Vietnam’s diplomatic activities in 2017, Ngoc confirmed that the brightest spot on the diplomatic panorama is the successful hosting of the 2017 APEC year.

Thanks to the foreign press, the success of the APEC Year 2017 was spread far and wide across the international community, giving rise to the image of a proactive and dynamic Vietnam, he added.

The country welcomed over 30 delegations led by Heads of State, high-level leaders, and Foreign Ministers.

The diplomatic activities have made great contributions to mustering external resources of national development, the Deputy Minister said, noting that the country’s GDP growth in 2017 was over 6.8 percent, exceeding previous targets and projections, and was the highest figure in the past 10 years.

The number of international visitors to Vietnam reached 12.9 million, a year-on-year increase of 29 percent, for the first time putting Vietnam on the list of the countries with the fastest tourism growth in the world. -VNA