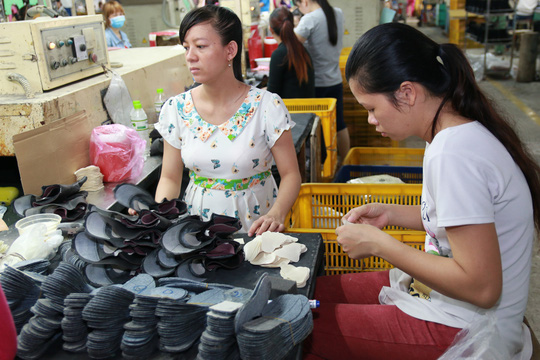 Speaking at a seminar to release the 2016 macroeconomic report, Thanh was optimistic about the country's economic restructuring.

For a long time, Vietnam has been considered an economy that has taken advantage of its cheap labor force. Foreign experts say this is ‘economic development with no depth’.

However, Thanh said he can see signs of the national economy developing with less reliance on a cheap labor force.

Thanh cited an official report as saying that while the number of businesses has increased sharply to a record high, the number of workers has decreased.

This can be explained by the fact that the economy has not expanded in labor-intensive fields such as mining and agriculture. Both sectors saw lower growth rates last year.

Meanwhile, the sectors, which do not need high numbers of workers, while utilizing many machines and equipment, have witnessed strong growth.

Bui Trinh, a respected economist, when asked what were the ‘brightest parts of the picture of Vietnam’s trade’ by Hai Quan’s reporters, said he can see a sharp increase in exports of agricultural produce and seafood, except rice, and a gradual decrease in the exports of minerals such as crude oil and coal, commenting that Vietnam is escaping from an economy based on the export of products ‘dug from the earth’ and natural resources.

International and Vietnamese experts in recent years repeatedly have warned that Vietnam can no longer count on the cheap labor force as the competitiveness of the economy.

Deputy Prime Minister Pham Binh Minh, in his recent speech, also said that in the years to come, under the pressure of the labor unions and employees’ expectations on minimum wage increases, cheap labor force will no longer be the advantage for Vietnam to attract FDI.

“We need a new economic growth model with focus on quality, productivity and knowledge,” he said.

The National Wage Council has decided to raise the regional minimum wage by 7.3 percent in 2017.

Thanh Nien quoted its sources as saying that in order to improve the current situation that Vietnam has been developing based on a cheap labor force, it needs big changes in policies on education and bigger opportunities for youth to approach technology.

This is a difficult task, but feasible. At Intel Products Vietnam, for example, every Vietnamese worker there can create export value which is 93 times higher than average export value created by one worker at one foreign invested enterprise in Vietnam, according to a Fulbright survey.