VietNamNet Bridge – Economists have warned that Vietnam could fall into the middle-income trap, and it is predicted that within several years it could even fall behind Laos and Cambodia in economic growth.

VietNamNet Bridge – Economists have warned that Vietnam could fall into the middle-income trap, and it is predicted that within several years it could even fall behind Laos and Cambodia in economic growth. 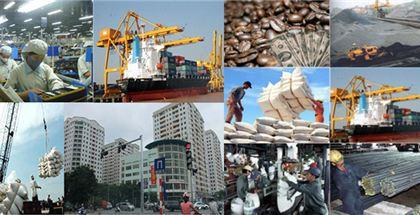 Laos and Cambodia are believed to be at lower development levels than Vietnam.

Deputy Minister of Planning and Investment Nguyen Chi Dung admitted that if the current growth continued, Laos and Cambodia would outstrip Vietnam in just three or five years.

While Vietnamese government officials are reluctant to talk about the middle-income trap, international experts said that Vietnam had fallen into the trap.

“I can say for sure now that Vietnam is falling into the middle-income trap,” said Professor Kenichi Ohno, director of the Vietnam Development Forum project.

Dr. Tran Dinh Thien, head of the Vietnam Economics Institute, noted that many analysts have avoided the discussion for the sake of appearances, but in fact, Vietnam had fallen into the trap.

Economic growth began slowing down in 2007 and dropped to a 15-year low in 2012. Though the growth rate was higher in 2013, it was still below expectations.

Analysts cited reports by international organizations as saying that Vietnam now ranks in a low position in terms of human-resource development and education.

And its number of patents and published scientific articles is lower than those of Laos.

In addition, Vietnam is 16th out of 24 ranked countries (22 Asian economies and the US and Finland) in the Creative Productivity Index (CPI) in a report released by ADB (Asian Development Bank) and EIU (Economist Intelligence Unit).

In the report, Vietnam ranks sixth in Southeast Asia, behind Laos, Singapore, Indonesia, Malaysia and Thailand.

The analysts said there was evidence to show that Vietnam was inferior to Cambodia in several categories: economic growth rate, attraction of foreign direct investment, automobile industry and agricultural production.

The World Bank, in its latest report, predicted that Cambodia would have the highest GDP growth rate in Southeast Asia in 2014, while Vietnam would see a modest growth rate of 5.5 percent.

A survey by the Vietnam Chamber of Commerce and Industry (VCCI) in 2013 showed that 54 percent of polled businesses investing in Vietnam said they had considered investments in other countries, including Laos and Cambodia.

In the past, Laos and Cambodia has not been considered Vietnam’s rivals in foreign direct investment.