Vietnam thus has backward participation in the global value chain. 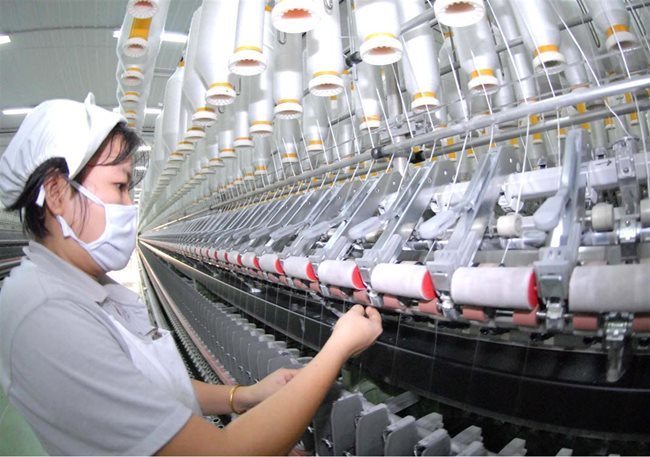 The other form of participation in the GVC of the second countries is exporting domestic goods to third countries which are used as input materials for those countries to produce goods for export to fourth countries. This activity is forward GVC participation.

The table below shows that Vietnam has participated more in the GVC over the past years, with the share of both backward and forward participation rising, from 50.6% in 2005 to 52.5% in 2010 and 55.6% in 2015. These ratios reflect the increasing participation of Vietnam’s production and export sectors in the GVC. In Asia, Vietnam’s GVC participation is only after Malaysia and Singapore.

Still, there are some notable points over Vietnam’s participation in the GVC in the short term.

Second, Vietnam’s forward GVC participation was declining, from 14.5% in 2005 to 12.5% in 2010 and 11.1% in 2015. The decline tells two things. First, since the assembly activities in Vietnam are continuously growing and devoted primarily to end-consumption goods, Vietnamese products are consumed directly in third countries instead of being used as input supplies (intermediary products) for another product; or put in other words, made-in Vietnam goods are favored in foreign countries. Second, this can be seen as an achievement of the economic restructuring process, specifically, the transformation of export, from raw materials (crude oil, coal and raw agro-products) to goods for consumption with high production content.

Nevertheless, the above figures also reflect a weakness in local added value, which has been decreasing while the ratio of backward participation has been increasing. They show that Vietnam has to import large amounts of components and intermediary goods for export production and domestic consumption. This is the often-stated weakness: the supporting industry. The industry plays a key role in supplying inputs for the assembly industry. With a weak supporting industry, the local added value will not be high.

In view of the (objective) weakness mentioned above, the matter is to upgrade the economy, which requires the creation of more local added value in exports. An example is the case of iPad in the studies by Xing and Detert in 2010 and Kraemer and associates in 2011 where they emphasized the low added value of assembly in the production process, which is less than 5% of the sale price of an iPad produced in China.

However, it’s not a complete assessment if only the local added value is used to make an overall assessment of the efficiency of production in the long term, as it may miss another key factor, the volume of assembly which may be equally important to the local added value. Though assembly generally makes up a very small share of the value of the finished product, the single activity of assembly on a large scale can bring about important benefits possible.

As an example, specialization in electronics assembly benefits greatly some companies in Asia. They have become excellent assemblers and attracted customers like Apple, Dell, Amazon, Nokia and Samsung.

Nevertheless, in the long term, a country or an economy cannot stand still and benefit from a production phase like assembly, be it a subjective will, as with the progress of technology and the low labor cost being no more an advantage, companies will relocate assembly activities to countries where the labor cost is lower or there is advanced technology with high efficiency automation. As an illustration, Taiwan has moved assembly activities to China and China is applying exactly this strategy.

While highly appreciating the solutions and policies set forth in the government’s Resolution No.115/NQ-CP on the development of supporting industries, Truong Thi Chi Binh,