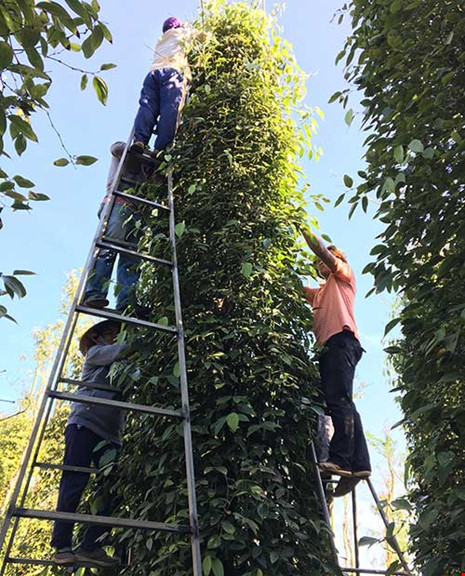 Soon after Vietnam announced a decision to suspend the import of five agricultural commodities from India due to concerns over infectious insects, India decided to halt the import of six Vietnam’s agro-products, namely pepper, coffee, bamboo, cassava, cinnamon and dragon fruit.

Pepper, coffee and dragon fruit were the export items suffering the most.

Of the six products, pepper has the biggest export volume.

According to Nguyen Mai Oanh, deputy chair of the Vietnam Pepper Association (VPA), India is Vietnam’s third largest market, after the US and UAE.

Currently, Vietnamese companies exporting pepper to India can receive quarantine certificates from Vietnamese agencies. However, very few enterprises are exporting products at this moment, because they are not sure if their exports will get customs clearance in India.

“We are still awaiting official information from the Indian and Vietnamese agencies after the two sides work on the issue,” she said.

The situation is less serious for coffee. Do Huong Duong, deputy general director of Maseco, said the coffee exports to India just account for a small proportion of the total coffee exports. In fact, India is also a coffee exporter and Indian businesses mostly do the trade.

However, Duong fears that the information may force farm produce prices down in the domestic market. The price decreases would give golden opportunities to foreign companies, including Indian trade companies, to lower the prices of Vietnam’s farm produce.

Under a decision released by MARD, the import of peanuts, cassia alata seeds, cocoa beans, French bean seeds and tamarind from India was stopped on March 1.

Tons of agricultural products from India were found contaminated with Caryedon serratus a dangerous type of insect. If the live insect spreads, it will cause huge economic damages to Vietnam and cause Vietnam to lose export markets.

An official from MARD said that the Indian side did not follow the international practice in some matters.

Second, the reasons cited by India to impose the ban have inadequate scientific basis and are not in line with Indian regulations. Third, the policy shows discriminatory treatment.

According to Hoang Phuoc Binh, deputy chair of Chu Se Pepper Association, the pepper price has dropped to below VND100,000 per kilo.