Violence against medical staff in VN should be prevented

Ninety percent of assaults against medical workers occurred while they were treating patients and those actions should be prevented.

Ninety percent of assaults against medical workers occurred while they were treating patients and those actions should be prevented. 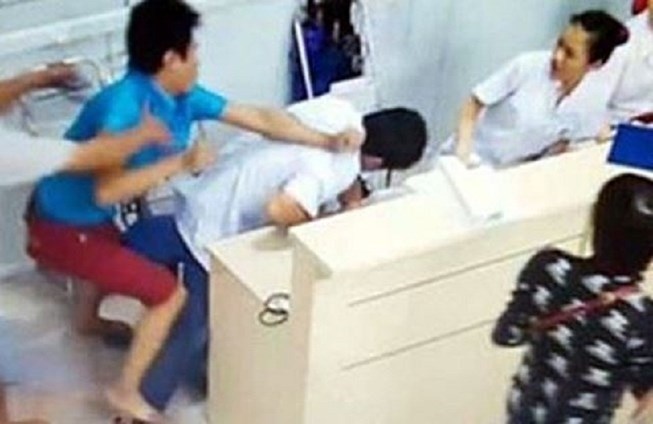 Ninety percent of assaults against medical workers occurred while they were treating patients and those actions should be prevented. (Photo: suckhoedoisong.vn)

Tran Van Thuan, Director of the National Cancer Hospital, made the statement at an online discussion on stopping violence against doctors and medical staff held recently in Hanoi.

Statistics from the Ministry of Health showed that as many as 22 assaults against medical workers were recorded between 2010 to 2017. Most of the cases occurred at provincial-level hospitals (60 percent) and 70 percent of the assault victims were doctors.

There were three serious cases in the first five months of 2018. In the latest case, a doctor at Saint Paul Hospital sustained multiple injuries to the face while treating a 7-year-old boy.

Earlier in February, two obstetricians in Yen Bai province were physically abused by a husband and 10 others after the medical workers, who were delivering his baby, asked him not to climb on the window railing to film the birth.

Violence against medical staff occurred in many countries around the world, including in developed ones, he said.

According to the World Health Organisation, 8 to 38 percent of health workers have been abused in the workplace.

A recent study published by Medscape in the United States found that 59 percent of doctors interviewed had been verbally abused. Another Indian study reports that up to 75 percent of public health doctors have been humiliated, 57 percent have been threatened and 12 percent have been assaulted.

Thuan said the reasons for the attacks ranged from abnormal behaviors of people under the influence of alcohol or other kinds of stimulants, while some argued that staff were not communicating reasonably with patients.

Participants at the discussion said that there were many reasons leading to violence, such as social moral degradation and agitation of some people against health workers. The legal framework was not strict enough and communication problems between health workers and patients were also to be blamed, they said.

To stop violence against medical staff at hospitals, the participants suggested strengthening the coordination between public security units to ensure security and order at hospitals. It was necessary to review and install cameras as well as emergency alarm systems. A task force should be set up to deal with unexpected incidents.

They proposed that medical workers should be educated on how to identify and prevent potential violent situations and recommendations should be provided so that they can protect themselves and avoid detrimental impacts on their health and wellbeing.

The participants supported the proposal by the Ministry of Health to supplement the responsibility of patients under medical examination and treatment services, with penalties to deal with acts of infringement and threatening towards health workers while performing their tasks under the Law on Examination and Treatment.

They also agreed on the need to strengthen dissemination of information to promote inter-agency coordination between the Government, police, and other agencies; the role and participation of people and patients in the detection of violence, as well as denouncing and preventing acts of violence promptly.-VNS/VNA