Deputy Minister of Agriculture and Rural Development Ha Cong Tuan affirmed that the ministry will not allow the pork price to increase dramatically as it has in China.

In late 2018, Asian swine fever (ASF) broke out in a number of Asian countries. The epidemic spread to many provinces in China and 200 million pigs have been culled there. In some localities, coupons have to be used to buy certain amounts of pork. 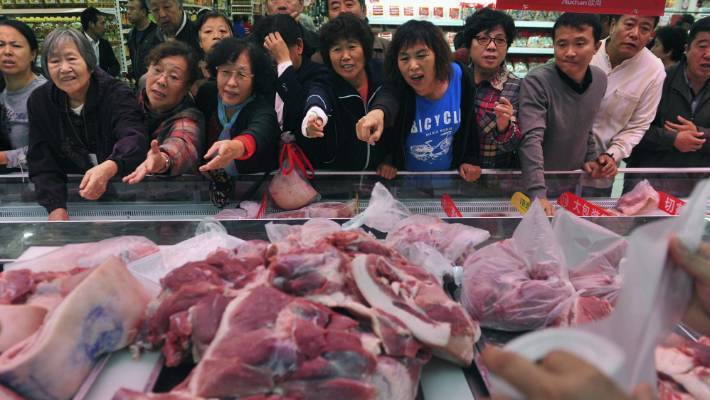 In Vietnam, ASF has appeared nationwide and 6 million pigs have been culled. As the supply is getting short, the pork price has been rising rapidly.

Citing the case of China, some experts warned that the pork price will continue rising, which may reach VND70,000 per kilogram in some days.

As such, the price increased by VND10,000-12,000 per kilogram compared with the end of September.

Bui Thi Hai, a petty merchant at Phuong Mai Market, said the pork price had increased every day and it was difficult to buy pigs from farmers to slaughter for retail.

“I had nothing to sell yesterday and the day before yesterday. Luckily, I can buy an 80 kilogram pig from farmers today,” she said, explaining that the number of pigs left among farmers is very low.

“Pigs have been culled because of the epidemic. Farmers are still reluctant to breed pigs again for fear of an epidemic,” Hai said.

Tuan has reassured the public that Vietnam will not see z pork shortage. He told the press on the sidelines of an event held on October 8 that the agriculture ministry will apply measures to stabilize the pork price.

“We are aware of the risk and we are considering measures to settle the problem,” Tuan said.

The Ministry of Agriculture and Rural Development (MARD) has encouraged farmers in localities which have not suffered from ASF and localities which can meet criteria for disease safety to resume breeding.

Vietnam is forecast to lack 200,000 tons of pork by the end of the year. The pork shortage will be offset by other kinds of meat, including beef, chicken and seafood.

Tuan said that the total meat output will be sufficient, but the pork output will decrease.

Vietnam’s pork shortage predicted to surge to US$1.3 billion by early next year

The pork shortage is adding pressure to the Vietnamese government’s efforts to keep inflation below 4% this year.