Japanese-Mito Hollyhock FC have granted Vietnamese striker Nguyen Cong Phuong an extra month to recover from his injury until February 15.

Japanese-Mito Hollyhock FC have granted Vietnamese striker Nguyen Cong Phuong an extra month to recover from his injury until February 15. 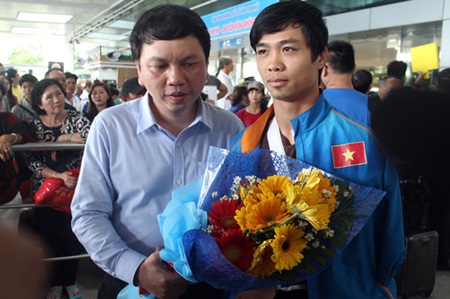 Cong Phuong welcomed by fans at the Tan Son Nhat International Airport upon his return to Viet Nam from the Asian U23 Football Championship in Qatar. — Photo vff.org.vn

Phuong suffered a collar-bone injury during Viet Nam's 2-3 defeat against the United Arab Emirates (UAE) in the last Group D match of the Asian U23 Football Championship on January 21.

He underwent immediate surgery in Qatar. His injury is estimated to take up to two months to heal.

Because of the injury, Phuong returned Viet Nam after the rest of the team. He will go back to his hometown in Nghe An to rest for a short spell and enjoy the Lunar New Year holiday.

Phuong will arrive in Japan only a few days before the beginning of J-League 2, which kicks-off in late February 2016.

The Vietnamese national will play for the Japanese club this year on loan.

Ha Noi FC have added Jean Eudes Maurice to their crew after several weeks of testing.

The V. League newcomer agreed to a one-year contract with the Haitian striker who used to play for Paris Saint Germain from 2009 to 2013 and pocketed a Ligue 1 title last season in which he scored four goals in 21 games.

The 30-year-old played 25 matches wearing the national jersey and scored 12 goals, one of which was a goal in World Cup 2018 qualifier.

Maurice recently played for Chennaiyin FC in India for four months before moving to Nea Salamis FC in Cyprus. At his peak, Maurice was valued at up to 350,000 euros (US$380,000).

SHB Da Nang have virtually won the title of a three-a-side tournament which is in progress in Pleiku City.

SHB Da Nang yesterday defeated Japanese Yokohama FC 2-1, for their second win, and will definitely become champions although the last match of the event is on Saturday.

Defender Thanh Nam scored an own goal, pushing Yokohama ahead in the 32nd minute. But the former national champions needed only seven minutes to level the score through a straight shot by Horace James.

Gaston Merlo lifted SHB Da Nang ahead 20 minutes after the interval and that proved to be the final result.