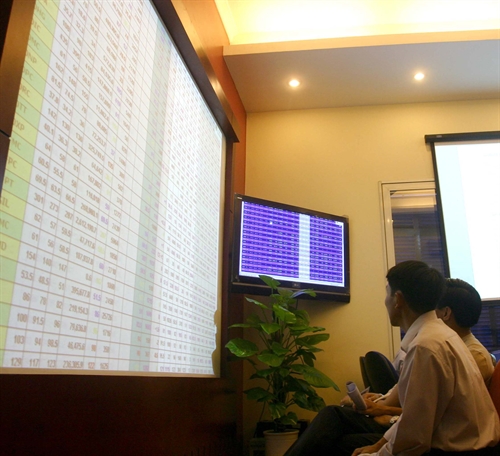 The benchmark VN-Index, the measure of 310 stocks, inched up 0.5 per cent to close yesterday’s session at 672.7 points, the highest in one and a half months. It has risen 2.2 per cent in the past three days.

Eight of the top 10 largest shares by market capitalisation gained value, of which Masan Group (MSN) was the most significant gainer with a rise of 4.5 per cent. Its share price has climbed 13.8 per cent in the last three sessions following the announcement of a 20-million-share buyback.

On the other end of spectrum, however, some blue chips declined and pulled back the market.

According to the report, the foreign fund reached a preliminary agreement to pay less than US$400 million, a discount from the current market price, for a 7.7 per cent stake. Vietcombank’s shares have gained about 31 per cent in value this year.

According to analysts at Maritime Bank Securities Co, the market will likely experience volatility when the VN-Index touches a strong resistance zone of 675-680 points.

Despite slight increases in the last two settlements, analysts reckon the market is being exposed to short-term risks, driven by the upcoming reallocation of exchange-traded funds and increasing profit-taking selling pressure when the market approaches its peak.

Liquidity declined with a total of nearly 140 million shares worth VND2.9 trillion ($130 million) being traded in the two markets, down 35.8 per cent in volume and 14.7 per cent in value compared with Monday’s levels.

Foreign trade showed mixed results yesterday. In HCM City’s market, the foreign sector was a net seller with shares worth a net value of almost VND117 billion unloaded. In the Hanoi market, the sector remained a net buyer with a net value of VND28 billion. On Monday, the foreign sector was a net buyer on both the exchanges with a total value of VND52.5 billion.