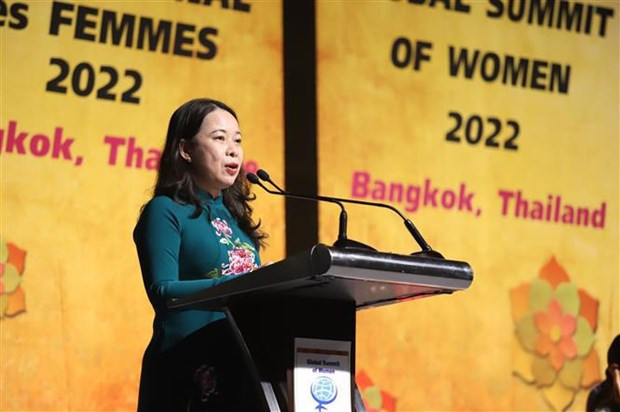 As one of the three keynote speakers at the summit's opening, the Vice President noted that the world is facing unprecedented instability due to the double impact of the COVID-19 pandemic and conflicts, which directly affect interests and livelihoods of women in many countries and regions.

However, these challenges can be transformed into opportunities given the context that the post-pandemic world is rapidly recovering with many positive trends in sustainable development, green and inclusive growth, digital transformation, public-private partnership, social security and education reform having created new economic opportunities for women, she said.

Therefore, Vice President Xuan called for bolstering the voice and participation of women in legislative and executive bodies, and the planning and implementation of development policies. She proposed enhancing women's economic empowerment through frameworks and policies that facilitate women’s entrepreneurship and access to finance and digital know-hows, ensure fair pay, and stable and suitable employment for women.

She urged further advancing gender mainstreaming and women’s empowerment in responding to climate change, minimizing natural disaster risks, and ensuring sustainable livelihoods, and underlined the need to enhance the capacity of female workforce starting with education strategies focusing on girls, to turn them into a skilled workforce for the future.

The Vice President affirmed that the consistent policy of the Vietnamese Government is to promote gender equality in each and every stage of the country's development.

She highlighted that Vietnamese women have taken more prominent positions and made notable contributions to every aspect of social life. In politics, over 30% of National Assembly Deputies are women, a higher figure than the regional average, and 50% of Ministries and Ministerial-level agencies have women as core leaders. In the economy, 29.8% of businesses are women-owned. As such, Vietnam ranks 6th among countries with the highest percentage of women entrepreneurs.

Regarding international cooperation, Vietnam has proposed and taken the lead in drafting various gender equality initiatives such as the Human Rights Council’s Resolution on Human Rights and Climate Change with a focus on women’s rights (2018), and the UNSC Resolution 1889 on Women and Peace and Security (2009). In particular, Vietnamese female officers have been deployed to UN peace-keeping missions in South Sudan and the Central African Republic, with higher representation than the UN’s recommended percentage.

"These persistent efforts have laid the groundwork for Vietnam to become one of the fastest countries in eliminating gender disparity in the last 20 years, as well as in fulfilling the Millennium Development Goal on Promoting Gender Equality and Empowering Women. Efforts are underway to implement the 2030 Agenda for Sustainable Development, particularly the objectives on gender equality and empowerment of women and girls," Vice President Xuan said.

She went on to say that Vietnam is focusing on implementing the Socio-Economic Recovery and Development Programme, including various priority policies to support women and girls in healthcare, education, employment, income, and violence prevention. In addition, Vietnam is actively improving policies and laws to facilitate women’s participation in the economy, and in the development of SMEs. Women’s involvement in areas with high added value such as science and technology, high-quality agriculture, among others, is encouraged via effective solutions.

Recently, to counter the negative impacts of the Covid-19 pandemic, Vietnam has continuously issued numerous policies to assist people and businesses in hardship, with various institutional breakthroughs in terms of eligibility and procedures, with priority given to women and girls. To date, 03 support packages, worth 5.5 billion USD, have been provided, she informed the delegates.

The summit this year drew more than 600 delegates from 52 countries and terrtories. In their opening remarks, Thai Prime Minister Prayut Chan-o-cha and President of the GSW emphasised the importance of promoting gender equality and empowering women in all fields, saying that this is a factor of increasingly practical significance in the current context of many challenges and fluctuations.

As the host country of this year's conference, the Thai PM highly appreciated the role and active contributions of the GSW in this regard, especially in finding solutions to arouse the potential and creativity of women and strengthen exchanges and connections between female politicians and businesswomen for social development and progress.

The same day, the Vietnamese delegation participated in and actively contributed to discussions at the summit, including a ministerial-level roundtable on public-private partnership in creating economic opportunities for women.

The delegation will continue to join in talks about topics of interests in the next two days.

Vietnam has always sent high-ranking delegations led by the Vice President to the Global Summit of Women. The country hosted a summit in Hanoi in 2008.