VN to earn around $3.3 billion from rice exports this year: experts

Viet Nam is expected to export between 6.5- 6.7 million tonnes of rice, bringing revenue of US$3.3 billion this year. 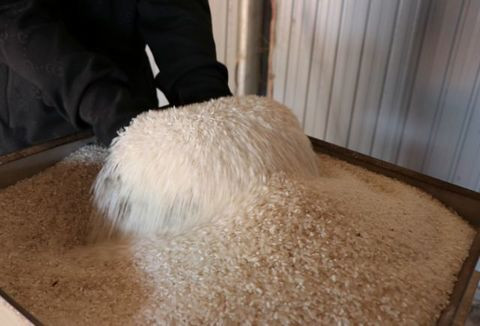 Vietnam is expected to export 6.7 million tonnes of rice worth $3.3 billion in 2022. — VNA/VNS Photo Dinh Lanh

Viet Nam is expected to export between 6.5- 6.7 million tonnes of rice, bringing revenue of US$3.3 billion this year.

Deputy Minister of Agriculture and Rural Development Phung Duc Tien made the forecast at a regular meeting early this week.

Cuong said if there was no unusual weather or disease, the agriculture sector would produce enough rice to ensure its targeted rice exports of between 6.5-6.7 million tonnes this year. However, rice volume and export price would completely rely on foreign importers.

Earlier, the Bangkok Post quoted Thai Minister of Agriculture and Cooperatives Chalermchai Sri-on about the issue that Thailand and Viet Nam had reached an accord aimed at raising the price of locally-produced rice in the global market amid soaring costs for farmers.

Concerning the fluctuations in rice price, Cuong affirmed that as Viet Nam is an agricultural country, food security was very important for 100 million Vietnamese people. Therefore, it was essential to ensure a certain plantation area for a long time.

Cuong further said the economic efficiency and profit of rice farmers were not low, however, farmers still experienced tough times in daily life. This was attributed to small and fragmented land being cultivated for rice by farmers.

According to statistics released by the General Statistics Office (GSO) and the Ministry of Natural Resources and Environment, Viet Nam has about 3.9 million hectares of paddy fields. The National Assembly has also outlined a resolution to maintain at least 3.5 million ha of paddy fields until 2030.

Cuong also talked about the one million hectares of high-quality rice fields that needed to get incentives to attract businesses to invest in warehouses, rice processing and logistics services. — VNS