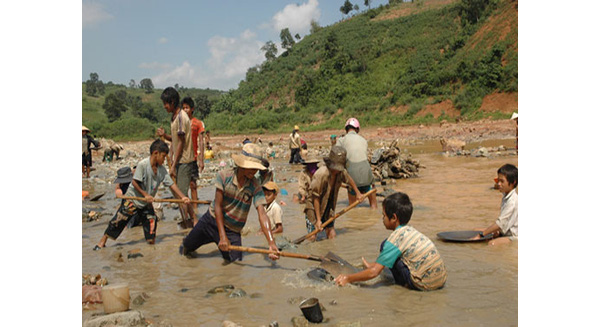 A report from the General Statistics Office (GSO) showed 6.82 percent growth in industry, lower than 9.66 percent in the same period of last year.

The decrease in industrial production growth rate was attributed to a decline in coal, oil and gas mining. The decline was not blamed on weak production activities, but on other reasons, including shortage of natural resources.

However, in order to reach the targeted GDP growth rate of 6.7 percent, GSO may suggest exploiting 2 million tons of oil more.

GSO emphasized that this should be seen as a temporary measure to ensure the growth rate.

Vietnam will gradually reduce crude oil exports, as oil reserves will be exhausted by 2035.

GSO said that it was necessary to think of other measures to ensure GDP growth, such as manufacturing and processing sectors, rather than relying on oil exports.

“The mining industry has declined because natural resources are decreasing and it is now more difficult to exploit minerals,” said Pham Dinh Thuy, director of GSO’s Statistics Department.

“Moreover, the sharp fall in the crude oil price has seriously affected the revenue of the mining industry,” he added.

Vietnam is considered the ‘black gold mine’ in Asia with estimated coal reserves of 3.5 billion tons.

However, after a long period of exporting tens of millions of tons a year, Vietnam now has to import coal to satisfy its domestic needs.

The Vietnam Coal and Mineral Industries Group (Vinacomin) estimates that Vietnam would have to import 20-30 million tons of coal by 2020.

Meanwhile, a report of the Ministry of Finance shows that aluminum and bauxite exploitation in Vietnam does not bring profit.

The Lam Dong bauxite and Nhan Co alumin complexes in Dac Nong province would only be able to make profits by 2018 and 2021, respectively.

“From an importer of energy, Vietnam has become an energy importer. There is an increasingly high risk for energy insecurity which would lead to a reduction in competitiveness and lag behind other regional countries,” said Ngo Duc Lam, an energy expert.