Chief Justice of the Supreme People’s Court Truong Hoa Binh hosted a reception in Hanoi on March 15 for Hungarian Minister of Justice László Trócsányi, during which both hoped that the two countries will intensify delegation exchanges and cooperation in legal and judicial affairs. 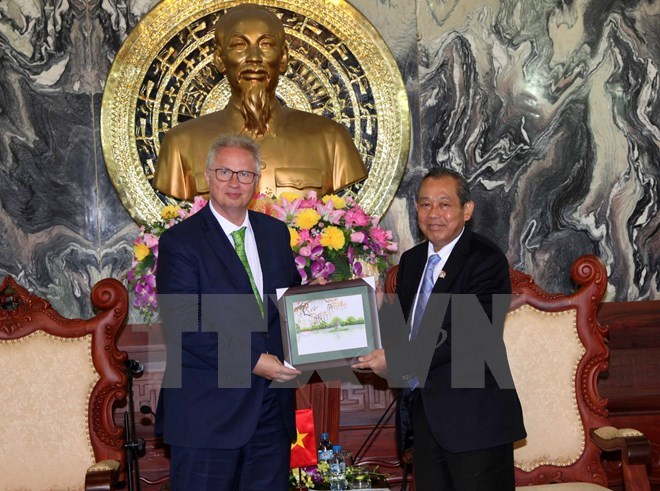 At the meeting, Binh affirmed that Vietnam and Hungary hold time-honoured friendship, solidarity and cooperation, which is reflected through a number of signed agreements.

In 2011, the two countries’ courts signed a memorandum of understanding on judicial cooperation, which has served as a foundation for them to carry out collaborative activities and to share information and tighten mutual understanding, he said.

He also appreciated the partnership between the two Justice Ministries, especially in the signing of their cooperation agreement.

Speaking highly of the role of the Vietnam Supreme People’s Court, László Trócsányi informed the host of new points in the Civil Procedure Code and Criminal Procedure Code of Hungary to be approved.

He also shared his opinions with the Vietnamese Chief Justice on several issues of mutual concern.

The Hungarian minister is on a working visit to Vietnam from March 14-17, which aims to further strengthen judicial cooperation in particular and bilateral friendship and cooperation in general.

Hungary is willing to share its experience and wants to learn from Vietnam’s experience in justice, thus deepening links between the two countries’ judicial sector, said Hungarian Minister of Public Administration and Justice Laszlo Trocsanyi.

The Hungarian guest made the remark during a talk with his Vietnamese counterpart Ha Hung Cuong on March 15 as part of his working visit to Vietnam from March 14-17, which aims to further strengthen judicial cooperation in particular and bilateral friendship and cooperation.

He briefed the host on his country’s judiciary, saying that the Hungarian Ministry focuses on enhancing the trust of its people in the national judiciary and protecting the country’s constitution.

Justice Minister Cuong said he believes the visit will open new opportunities for the two sides to share experience, contributing to developing both sides’ judiciary.

He stressed that Vietnam is working to fine-turn its legal system in order to serve the enforcement of the 2013 Constitution.

On the occasion, a cooperation programme between the two ministries in 2016-2017 was inked, with a view to making concrete their cooperation and bilateral commitments in many fields - that were agreed in a previous agreement signed in 2012.

Under the programme, the two ministries will exchange experience to help with Vietnam’s building of a law on the issuance of administrative decisions, and an electronic database serving the judicial sector, especially in the fields of notarisation and registration of secured transactions.

They will hold negotiations of a mutual legal assistance agreement in civil matters between the two nations, and discuss measures to further promote links in mutual legal support within t he Hague Conference.

The Hungarian guest will give a speech at the Hanoi Law University on Hungary’s new constitution and experience in constitutional enforcement in the country.