VietNamNet Bridge – The large waste treatment plant in the southern province of An Giang, designed to treat garbage and make organic fertilizer, is now being used as a garbage dump.

VietNamNet Bridge – The large waste treatment plant in the southern province of An Giang, designed to treat garbage and make organic fertilizer, is now being used as a garbage dump. 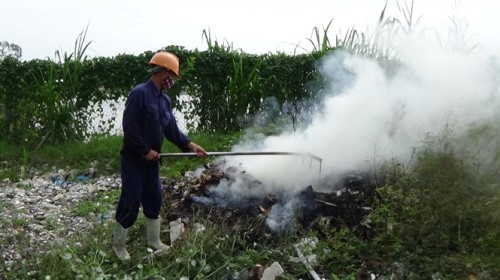 The large plant, covering an area of 336 square meters, built with huge capital of VND3.8 billion, has been left idle after 10 months of operation.

The plant treated domestic garbage with microbiology composting technology, with the capacity of 5 cubic meters per day. Under the production process, domestic garbage was classified and composted for 30 days before it was processed into organic fertilizer to be used in agriculture production.

However, the plant operated only for a short time before it had to stop operation in June when it was put under the control of the Phu Tan district Public Works’ Management Board.

The problem was that the composting method used by the plant could treat organic garbage, while it could not help compost inorganic garbage.

Meanwhile, the major supplier of garbage, which collected garbage from 1,600 households in Phu Binh and Binh Thanh Dong communes, had both organic and inorganic rubbish.

Because of the worker shortage, it was impossible to classify rubbish in an effective way, which has led to ineffective composting.

The plant’s area has become a place for people to leave litter because there is nowhere for them to do this.

The workers of the plant, therefore, not only have to collect garbage every day, but also have to burn the rubbish.

However, due to the limited workforce, the workers cannot settle the huge amount of garbage brought there every day.

As a result, the mountain of rubbish there is getting larger and larger. The waste treatment plant has become a “waste containing plant”.

Vo Van Tha Em, a worker of the Phu Tan district Public Work Management Board, said the plant is now being run by three workers, including Em and two others. “We guard the plant and collect garbage in shifts,” he said.

The worker said the only solution to the plant is to set up a dumping ground for inorganic waste. “We cannot withstand the terrible smell from the garbage,” Em said. “We have got too tired of the job because of the low pay and high risks.”

“Billions of dong were spent just to build a garbage containing dump,” he said.

The latest report from the An Giang province Department of Natural Resources and the Environment showed that about 1,305 tons of solid garbage was being discharged every day in the province, including 478 tons of garbage in urban areas and 827 tons in rural areas.

However, only 780 tons of garbage can be collected each day, just equal to 60 percent of the solid waste, while only 325 tons of solid waste can be treated and 195 tons cannot be collected for treatment.