This is a typical story of Russian tourists such as Aleksei, who has decided to return home after being forced to sell his motorbike to make ends meet due to the COVID-19 outbreak. 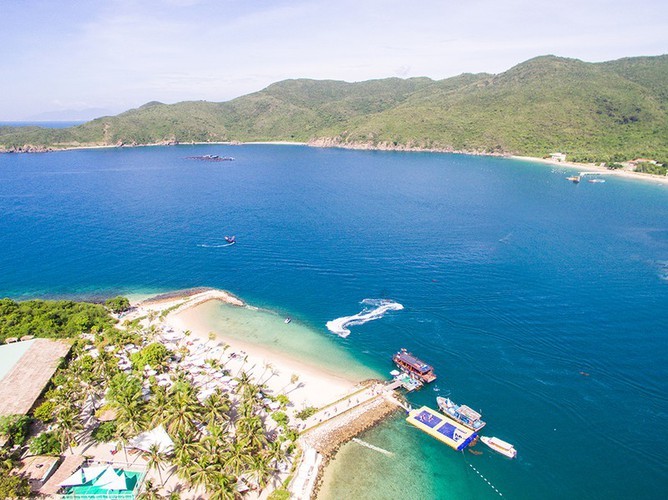 The impact of the novel coronavirus epidemic can be blamed for ruining his plan to stay longer in Nha Trang, a city he had fallen in love with.

Unlike those who came to Nha Trang just for the purpose of relaxing, Aleksei came looking for a job in the hope of staying longer in the coastal city, spending all of his savings renting a house in Tan Lap ward.

“I love travelling. When I first arrived in Nha Trang, I asked one of my Vietnamese friends who lived in Russia to buy an old motorbike. I then refurbished it and rented it out to customers,” he told Zingnews.vn.

Initially when there were no local COVID-19 outbreaks, many tourists came to Nha Trang on holiday, so starting up a motorcycle rental service helped Aleksei to earn a stable income. The business enabled him to reward himself with trips to neighbouring localities such as Da Lat, Ninh Thuan, and Binh Thuan.

However, when the epidemic eventually did hit Vietnam, Aleksei and many other people working in the service sector were severely affected, with many businesses beginning to struggle for money.

In July, he was excited when the Government made moves to welcome the return of tourists, although these plans were shelved when the virus witnessed a resurgence in central Vietnam.

With money running low, the Russian traveler-turned-businessman was forced to gradually sell off his motorbikes in order to survive.

“Today is the last motorbike I can sell, I don't know how to live over the coming days,” Alecksei confided. “I love Nha Trang very much, I have tried to hold on because of that love.”

Also from Russia, Borisovna tried to make a living by selling ice creams in Muong Thanh Vien Trieu, a luxury residential complex located in Nha Trang. Every evening, he would bring a trolley featuring a cooling system to the area.

“I can make any ice cream on demand for customers,” he said.

Having lived in Nha Trang for four years, this is the first time that Borisovna has sold ice creams for money. He used to be an interpreter for a travel agency specialising in Russian tourists.

“When I worked for the travel agency, I found both foreign tourists and local people loved eating ice-creams like these. It took me more than a week to learn how to do it online,” said Borisovna.

However, a lack of customers saw the business struggle.

“It was difficult to earn a living here, so I sometimes asked for help from my relatives in Russia. Nha Trang is very beautiful and peaceful, so I will try to stay on. I expect the epidemic will soon be stamped out so that I can get a steady job again and stay in Nha Trang longer.”

At the Social Care and Support Center in Khanh Hoa province, there are two special tourists present who are both from Russia.

For many locals in Hon Chong, 53-year-old Dnestrian Igor is a familiar face as he can often be seen walking and swimming in the afternoon, in addition to greeting local people.

In January, Dnestrian unfortunately suffered a traffic accident. Following this he was seen returning to Hon Chong and began wandering and begging along Pham Van Dong street.

“When he was transferred to the centre, Dnestrian showed signs of psychosis in the aftermath of the accident," according to an official of Khanh Hoa Social Care and Support Center.

He was then taken to Khanh Hoa Psychiatric Hospital to undergo psychosis treatment. Due to his mental health, he returned to the centre before gradually recovering.

It was during this time that Dnestrian remembered his address in his native Russia, along with the names of his relatives.

“I have received great care from doctors here, but I want to go home with my family," Dnestrian told Zingnews.vn.

The second special tourist, Andrei Ganev, has been staying at Khanh Hoa Social Care and Support Center for three months.

“Andrei was brought here by the authorities for help because he had no personal papers and money,” said the director of the centre.

Over the past few days, Andrei has undergone a body temperature check by doctors because he has been showing signs of a fever.

Andrei first entered the country in January, although he lost all of his papers and money, forcing him to wander the streets.

“The epidemic made it impossible for me to find a job to support me. I feel very lucky to be here, I feel very great. Thank you,” said Andrei.

Andrei said he first came to Nha Trang for the purpose of traveling five years ago. Whenever his visa expired, he was able to renew his previous one so was allowed to continue staying in Nha Trang.

"Now it is the time for me to go home. When I completely recover and the epidemic is over, I will return to Nha Trang to travel. Local people here are so wonderful. Thank you," said Andrei.

After 15 years living in Russia, Vinh, the name of a Hanoi-born woman, decided to move to Nha Trang. Renting a 3-storey house on Tran Phu street, she opened a restaurant in order to serve tourists.

The house has since become a favourite destination among many Russian tourists, especially those like Aleksei.

When the COVID-19 epidemic hit the city, it took a major toll on all businesses and services, with Vinh’s restaurant transforming into a place to help Russian guests stuck in Nha Trang.

Each day, tourists come to the restaurant, although not everyone has the money to pay.

“If they have money they will pay it, otherwise they will give back another day,” Vinh confides.

The female restaurateur recalled that when she first moved to Russia, she also received support from many local people. Now when Russian people face difficulty, she is willing to support them.

According to Vinh, the majority of the Russian tourists stranded in Nha Trang come from remote areas in their home country. Falling in love with the beautiful scenery here at first sight, they decided to stay and seek a job to make ends meet.