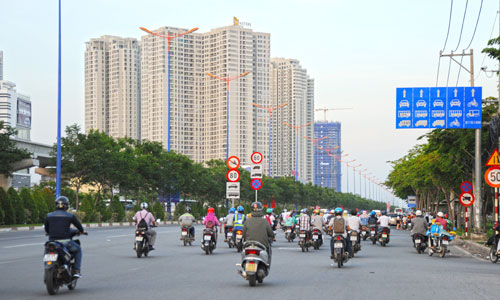 Joining the HCMC real estate market three years ago and unable to speak Vietnamese, Yang, an investor from Taiwan, flies to Vietnam often and goes to meetings and discusses business with partners with his Vietnamese interpreter.

Sometimes, Yang’s sons support their father in deals  They speak English and they have business of their own. Eighty percent of investment decisions made by Yang depend on the Vietnamese interpreter.

Yang now has three high-end apartments in the central business districts in HCMC, two street-front in districts 9 and two villas in district 2. All of them are being leased. He also has assets in Binh Duong and Dong Nai provinces.

A real estate broker, who said he was familiar with properties in Thao Dien ward and Binh Thanh district, is sure that Yang has invested nearly VND100 billion, or $5 million in Vietnam, while he is still looking for new opportunities in the eastern part of HCMC.

The Taiwanese man said the business in the commercial hub of Vietnam brings a profit margin much more attractive than in his homeland.

According to a consultancy & brokerage firm in district 2, its list of VIP clients includes many investors from South Korea who have bought apartments at Mastery Thao Dien project to lease to their fellow countrymen.

A senior executive of the firm said a project in the same district, launched in July, has attracted hundreds of buyers from South Korea.

Under the current regulations, investors must not sell more than 25-30 percent of apartments of one project to foreigners. When the executive of the brokerage firm explained the regulation to the South Korean buyers, he advised them to sign long-term 50-year leasing contracts with the investor instead of purchases. And the South Koreans accepted this.

Viet An Hoa’s CEO Tran Khanh Quang commented that the HCMC market now has diverse real estate projects suited to different groups of customers, while the prices are very competitive in the region. Meanwhile, the prices in other Asian markets have become too high and the markets are no longer attractive.

In such conditions, pouring money into the HCMC market of 10 million people is a good choice.

HCMC is expected to have great potential like the Chinese market 10 years ago. The profit margin from real estate investment has been stable at 15-20 percent per annum.