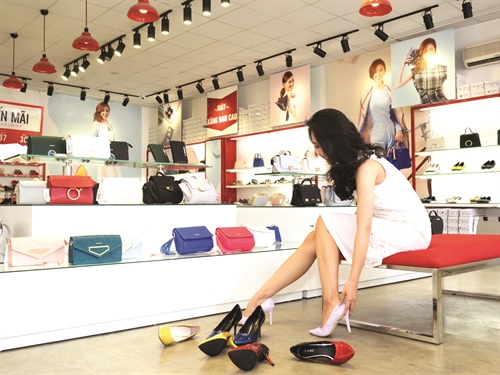 Unwrapping a gift box on Valentine's Day, Minh Ha felt excited when realizing that the gift was a pair of boots. After trying on, Ha put the boots into her closet with five other brand-new pair of boots.

Ha and other Vietnamese women spend more money on shoes, cosmetics and fashion products than their mothers and grandmothers did in the past. This has prompted many investors to pour money in the projects to develop fashion brands.

Besides the once-famous brands such as Hanh Dung, Hong Thanh and Dong Hai, the market has seen a lot of newcomers including Vascara, Evashoes, Junor and Sablanca.

Analysts said that joining the domestic fashion market is a daring move for domestic investors. Vietnam, while listed among the world’s top four footwear manufacturers, mostly does outsourcing instead of making products under its brands.

This explains why Hanh Dung, Hong Thanh and Dong Hai, considered the ‘elder brothers’, have fewer than 10 shops each, mostly in HCMC. Some brands have shifted to distribute products of other manufacturers, while others have failed to build up their brands in the domestic market because of the weak distribution networks or unreasonable products.

However, the failure cannot prevent other investors from proceeding. Established in 2007, Vascara, with Brazilian origin, design and production center in Vietnam, managed by Vietnamese, has had more than 80 shops throughout the country.

Juno, present for 10 years in the Vietnamese market, has become well known in the last two years after receiving investment from Seedcom. With support, Juno now has nearly 40 shops in six provinces and cities.

While fashion companies generally don’t pay high attention to online marketing, Juno spends big money on this work. A report of Buzzmetric showed that Juno was the brand with leading number of interactions on last year’s Black Friday, 52,000, which was higher than foreign brands such as Zara, H&M and Adidas.

There are two common characteristics for Vascara and Juno. First, both of them focus on mid-end products, not luxury items. Second, their products are diverse and have youthful designs.

According to Juno and Vascara, the domestic footwear & handbag market is estimated to have value of $1 billion, in which businesses like Juno and Vascara hold 1-2 percent of the market share, while the gross profit is between 30 and 40 percent.

The Ministry of Industry and Trade estimates that the domestic market needs $1.5 billion worth of footwear products each year, while Vietnamese companies can satisfy 40 percent of the demand.