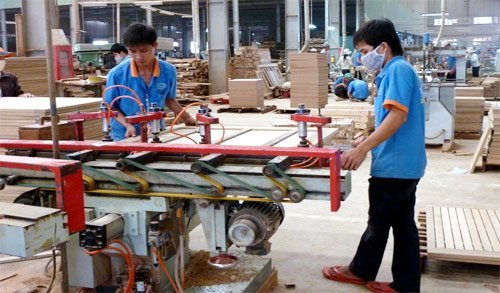 
Seventy workers from the AA Corporation were sent in October 2017 to do the interior work for Park Hyatt at Kitts and Nevis, a leading 5-star hotel in the Caribbean region.

All the wooden items were made by Vietnamese enterprises. The revenue is over $16 million, equal to annual export turnover of an enterprise with 700 workers.

Besides Park Hyatt at Kitts and Nevis, the luxury interior works of the 6-star hotel Rosewood Phnom Penh Hotel in Cambodia were also made by a Vietnamese enterprise.

“All over the world, from the US, Japan to Dubai, Singapore, Myanmar and Laos, there are works with premier quality bearing the Vietnamese stamp,” said Nguyen Quoc Khanh, chair of the Fine Arts & Woodwork Processing Association of HCM City.

“A lot of the hotel management groups and 5-star resorts all over the world, such as Starwood, Accor, IHG, Marriott, Hilton and Fairmont, want to choose Vietnamese enterprises to design and execute interior works for them,” he added.

Vietnam’s high-end interior works are becoming better known in the world market with fine high-quality products with reasonable prices. Emirates, the world’s Dubai-based luxury airline, chose a Vietnamese supplier for its First Class rooms in all its aircraft.

In Vietnam, the luxury works such as Gem Center, Park Hyatt Sai Gon and 5-star hotels all are works of domestic enterprises.

According to Phuong, pursuing the highest market segment and sales of interior space is part of a strategy that many enterprises are pursuing.  What Vietnamese enterprises now must do is invest in branding and marketing.

Tran Viet Tien, director of Lavanto Home Décor, said the new target for Vietnam’s woodwork industry is not just more than $8 billion in export turnover, but higher added value for its products.

“We don’t try to export as much as possible, but we should create our value,” he said.

The world interior furnishing market was valued at $428 billion in 2017 and is expected to grow by 3.5 percent this year. Vietnam ranks fifth among the largest exporters in the world, following China, Germany, Italy and Poland.
RELATED NEWS