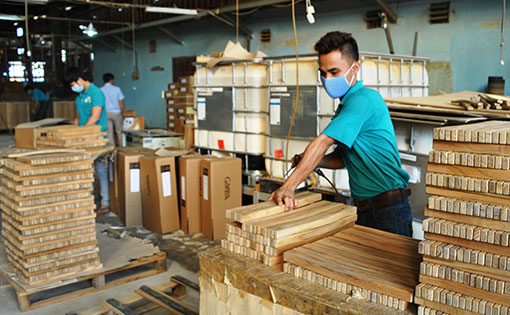 Vietnam exported $680 million worth of products in April

A report from the General Department of Customs (GDC) showed that export turnover of all woodwork items in the first four months of the year increased significantly.

Vietnam exported $680 million worth of products in April and $2.6 billion in the first four months of 2018, an increase of 9 percent over the same period last year.

Wooden furniture manufacturers expect another prosperous year in 2018 as demand is predicted to continue to increase globally.

Most large manufacturers have enough orders to keep them busy until mid-year. Some of them even have orders for the entire year, especially from Europe and the US.

A director of a wooden furniture company confirmed there are more clients from the two markets this year as European and American importers have shifted orders to Vietnamese enterprises instead of Chinese firms.

In addition, exports to South Korea have been increasing rapidly as Vietnam’s products have become more and more favored here. Exports have also been facilitated by the bilateral FTA (free trade agreement) between Vietnam and South Korea.

According to Nguyen Ton Quyen, deputy chair of the Vietnam Timber and Forest Product Association (Vifores), the target of $9 billion turnover this year is within reach. However, to obtain such high export turnover, Vietnam would need a large amount of materials.

The agriculture ministry reported that by the end of April 2018, Vietnam had imported $698 million worth of timber materials, up by 2.5 percent compared with the same period last year.

It is estimated that for every $1 billion worth of increased export turnover, the material needed would be 3.5 million cubic meters. Meanwhile, domestic sources (planted forests) can only satisfy 10-15 percent of demand.

To solve the material shortage, Vifores has proposed the state restrict material exports, especially chips which can be used for other work. It has also suggested fully exploiting domestic materials such as rubber wood and fruit tree wood.

“To do this, the support by the State will be very important,” Quyen said. “The state should not make too deep intervention into businesses’ transport and examination over timber origin.”

According to Nguyen Quoc Tri, general director of the Forestry Department, in the long term, Vietnam needs to develop domestic material sources, which will allow to both reduce production costs and trace the origin of timber.