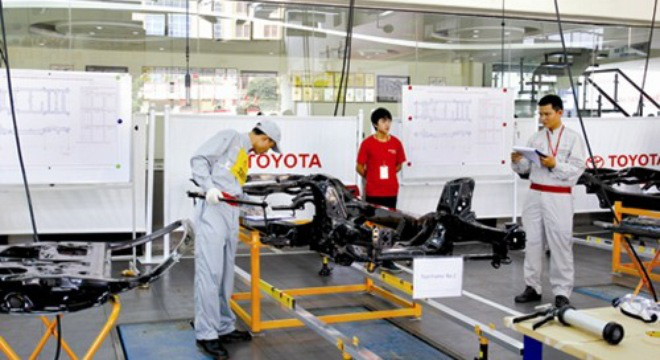 A recent survey by JETRO (Japan External Trade Organization) showed Vietnamese workers received $4,025 on average per year in 2016, though they worked for leading Japanese companies.

The amount of money was less than 50 percent of the salary that Japanese companies paid to Chinese workers who work for factories in China.

JETRO’s Chief Representative Atsusuke Kawada said the pay to Vietnamese shows that Vietnam remains a market with cheap labor costs in comparison with other countries. This is a great advantage for Vietnam to attract Japanese investors.

Nguyen Dinh Cung, head of CIEM said that labor productivity is closely related to the average income of workers, because it is the surplus value they bring.

In ILO’s ranking, Vietnamese labor productivity is among the lowest in Asia Pacific, which is only higher than Laos and Cambodia.

“One must not shift the blame onto Vietnamese workers. Vietnamese are diligent and creative. They usually win first prizes at the regional workers’ skill competitions, while the Vietnamese IQ is high, just lower than Singaporeans. Why is Vietnamese productivity lower than others?” she said.

Many Japanese conglomerates have factories in Vietnam, but they mostly do assembling, work which creates the lowest added value in the value chain.

This explains why the wages Vietnamese workers receive cannot be high.

Vu Thanh Tu Anh from Fulbright Economics Teaching Program (FETP) said that Vietnam is still at the bottom of the ‘smile curve’ despite the presence of the world’s leading corporations in Vietnam over many years.

He said that Vietnamese workers cannot expect high salaries until foreign invested enterprises in Vietnam do the assembling and undertake simple jobs in value chains.

The report by JETRO, released on February 14, showed that Vietnamese managers in Japanese manufacturing enterprises earned an average of $14,629, or VND330 million in 2016.