The Mong’s ancestors lived along China’s Yang Tze river and engaged in wet rice cultivation. Because of disputes with Han people, some of them migrated southward and settled in Vietnam. They lived in Vietnam’s Hoang Lien Mountain Range, mostly in Sa Pa township.

“Different Mong branches, such as the Black Mong and the White Mong, wear similar indigo clothing. In the past they wore black clothing. But then they began wearing indigo to harmonize with plants and nature,” Giàng Seo Gà said.

Gà said the Mong altar had 3 symbols – the Earth, the Sun, and the Moon. The biggest silver circle in the center is the Earth. Two smaller, dark purple circles with fringes are the Sun and the Moon. Human being is black, a noble color.

Mong men wear loose pants, a long-sleeve blouse, a jacket, and a hat. His jacket has embroideries on the collar.

“In the past, the blouse of the Mong men had big and small stripes on the sleeves. Only Mong men in Sa Pa wear jackets. They proudly wear jackets at festivals and ceremonies,” Gà explained.

Giàng A Sài, an official at Sa Pa Culture Center, said the men often go to the forest, they wear loose pants for easy climbing.

“In the old days, Mong women wore skirts. But because they lived in the forest which had high humidity and a lot of mosquitos, they preferred leggings until now. Mong women wear long-sleeve, embroidered blouses. They wear black clothes to work and flowery, colorful outfits to festivals,” Gà said.

Mong branches decorate their indigo clothes with typical embroidered or printed patterns to differentiate themselves from others. VOV5

For Lu ethnic people, brocade weaving skill is crucial for any women. Lu ethnic women have made contribution to preserving and promoting this traditional craft. 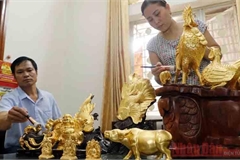 Cham people in the Mekong delta province of An Giang live mostly in An Phu, Tan Chau, and Phu Tan district.