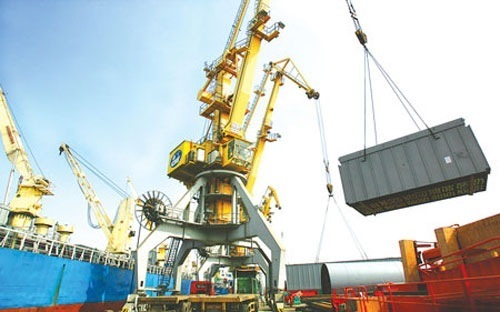 The Ministry of Planning and Investment (MPI), while presenting its report at the regular meeting on May 4, warned that Vietnam may fail to obtain the targeted 6.7 percent GDP growth rate in 2016.

The national economy has shown a strong recovery with the high GDP growth rate of 7.01 percent in the fourth quarter of 2015.

However, in the first quarter of 2016, the GDP grew by 5.46 percent only, which represented a 1.55 percentage point decrease.

The slowdown in growth is seen not only in agriculture, which has suffered from natural calamities, but also in the processing industry which is forecast to see a strong recovery and the highest growth rate.

Regarding agriculture, forestry and fisheries, the frost in northern provinces, drought in the central region and Central Highlands, and the drought and saline intrusion in Mekong River Delta all have led to a minus (-) growth rate of 1.23 percent in the sector. The agricultural production witnessed the sharpest decrease of 2.69 percent.

Meanwhile, the mass fish death caused by the sea pollution in the central coast has badly affected aquaculture and sea tourism.

Regarding industrial production, the industry production index in April decreased by 1.7 percent compared with March, while it increased very slightly in the first four months of the year by 7.3 percent, or 2.1 percentage point lower than last year’s same period.

The mining industry witnessed minus growth rate of 1.7 percent, while the processing and manufacturing industries grew by 9.6 percent only, or 0.5 percentage point lower over the same period last year.

MPI warned that if the crude oil price recovers in the time to come, which would lead to the increases in the input material prices, the manufacturing and processing industries would face bigger difficulties and the industry growth rate would even be lower than the first months of the year.

Commenting about the macroeconomic performance, MPI says it is ‘stable but not sustainable’. The factors including push cost, demand pull and natural calamities may push the prices up, which would be one of the barriers that make it difficult to obtain the 6.7 percent GDP growth rate this year.

“I cannot see the foundations for this year’s economic growth,” said Nguyen Dinh Cung, head of CIEM. “The fiscal and monetary policies are not enough to create driving force for the economic performance. They are just enough to maintain macroeconomic stability."

The World Bank has lowered its predicted GDP growth rate for Vietnam from 6.6 percent to 6.2 percent.