Nguyen Quang Tung spent one gap year taking a trans-Vietnam trip, but his aim was not just to travel. 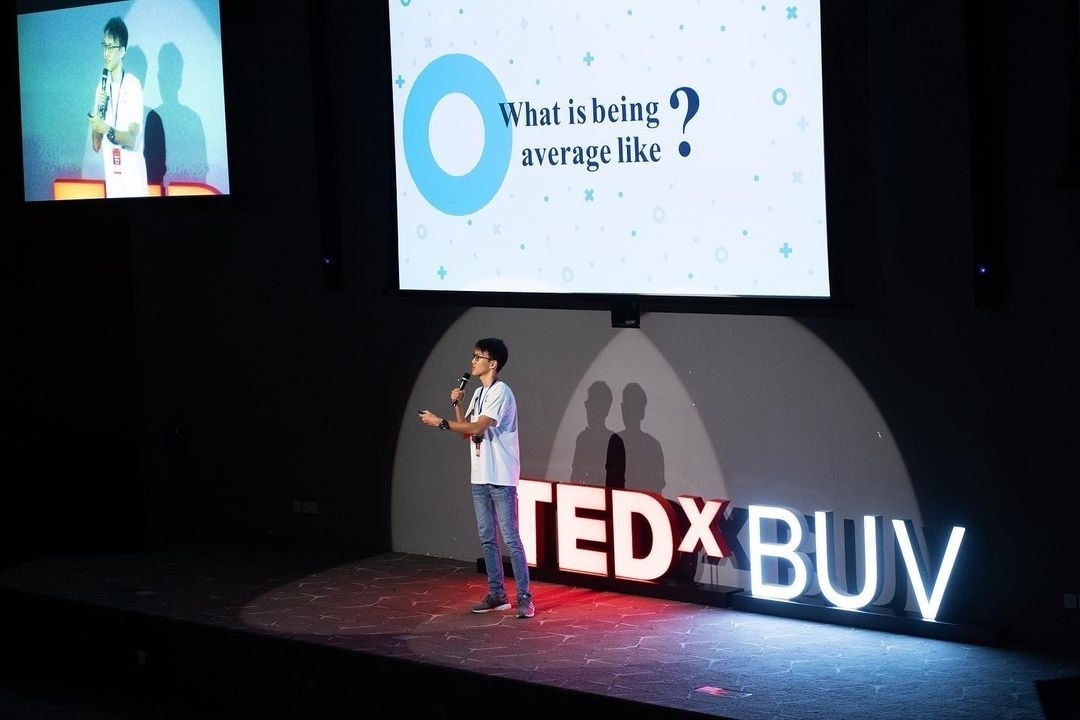 Tung is a speaker at TEDx BUV

“People always set timeline for themselves. For example, they have to begin going to school at the age of six, enter university at the age of 18 and take the first job at the age of 22 after finishing university. However, nobody is slow and nobody is fast. The life of every man is a private run and our goal is not to step back,” said Tung, a second-year student at Macalester College (US) in his blog.

Tung is a former student at the High School for the Gifted in Foreign Languages. When he was in the 11th grade, he received a scholarship from United World College (UWC) and decided to study abroad,

Tung left Vietnam for China to study at high school and foresaw that he would finish high school one year later than his friends of the same age in Vietnam.

“Was it worth doing that?” many people asked him. He told them that it was valuable because of the experience he got from the study.

In China, Tung had the opportunity to teach at a school in the most difficult area of Hubei province. Later, he participated many other activities during the two-year stay there.

The activities helped Tung practice skills and made him realize that he had a special passion for education.

After two years at UWC, Tung won a scholarship worth $280,000 to study education and economics at Macalester College in the US.

The school gave a $5,000 grant to Tung who had proposed organizing a summer camp to promote students’ creativity through experiences. Following the success of the first camp, Tung organized three more camps. The latest one lasted 10 days and 9 nights with the participation of 80 students.

At the camps, students learned design thinking, which many NGOs and startup have been using to solve problems.

He invited 10 panel speakers from 10 fields, hoping that individuals with different ways of solving problems would help students realize that there is no single prototype for improving things around them.

After exchanges and dialogues, students carried out social projects, which helped them learn presentation, financial management and media skills.

Tung realized that the opportunities to study abroad are reserved for excellent students or students from well-off families. So, he wanted to make changes in Vietnam.

“I hope that Vietnamese students can obtain the best educational experiences even if they do not study abroad,” he said.

Tung began implementing his idea by building an overseas study consultancy center at low fees. But he quickly realized that this was just like ‘sending excellent students abroad’, and it would not help change the status of Vietnam’s education.

Tung participated in the Sea Fall 2019 Voyage, a 109-day cruise on the sea to 12 countries in four continents. Participants had 5-7 days in each country.

After this trip, Tung began writing blogs to share his experiences.

One day, Tung received a message from a girl in Dong Nai who wanted Hung to visit and share his experience on how he ‘goes out into the world’. And he thought about going around Vietnam to inspire young people.

He led a group of 16 young people in Vietnam, and together they went to 11 cities and provinces to share experiences about their trip on the ‘open sea’.

Dreaming of classes in the country

Because of Covid-19, students have had to shift to online learning. Tung decided to return to Vietnam for one gap year to spend time to discover the land of the country.

“I want it to inspire young people. There are interesting and creative learning subjects which cannot be found in normal classes,” he said.

In the first phase, Tung opened five classes with five topics, and the initial success led hum to organize a ‘super summer course’ the next year.

Spending one gap year means that Tung will finish school one year later than his friends. However, he believes that the value of a person is not defined by the year he or she graduates from university, but by the value of the things they have done.