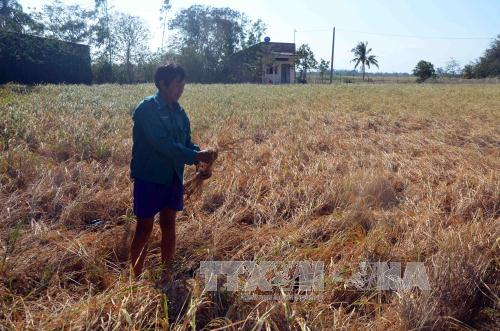 Le Anh Tuan from Can Tho University, in his article on Thoi Bao Kinh Te Sai Gon, warned that 2017 would continue to be a difficult year for agricultural production in the Mekong Delta due to problems in water supply. Water resources have been diminishing rapidly since 2000.

Vo Tong Xuan, a rice expert and president of Nam Can Tho University, said that local farmers have tried breeding shrimp and growing drought-resistant rice varieties, especially in the provinces of Ben Tre, Soc Trang and Bac Lieu.

In these localities, people have converted water with the salinity of 16 per thousand to 0.02 per thousand, which can be used by households The process of converting seawater into fresh water is now being applied at a water supply plant in Ben Tre province.

In some provinces such as Dong Thap, An Giang and Tien Giang, local authorities have encouraged people to cut rice crops and grow other crops instead. They have also suggested that farmers shift to farm fish.

Xuan believes that growing other crops instead of rice in sandy land areas is a good solution in the context of climate change.

Vietnamese working in Japan have been encouraged to help Vietnamese farmers find markets for their crops used as food for for cows. A report shows that over 90 percent of animal feed for cows are imports.

In the Mekong Delta, farmers now have three rice crops a year in an effort to increase rice productivity. However, experts have recently reconsidered the three-crop mechanism.

Rice should only be cultivated in alluvial areas along the banks of rivers or near large canals which can provide fresh water year round.

If farmers cut down one rice crop and spend time to grow vegetables for export to Japan, the profit they can expect would be higher than rice production.

Xuan, interviewed by local newspapers, emphasized the need to restore underground water, which is being overexploited.

He suggested pumping water underground when the floods are too big to store water, saying that though it is technically complicated, it still needs to be done.