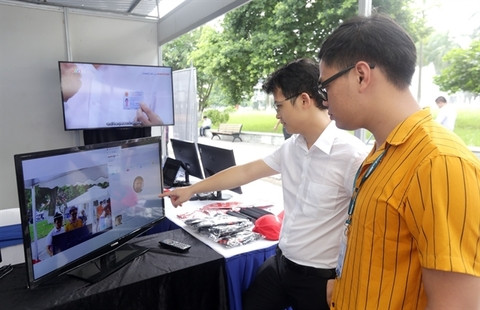 An AI-powered application on display at the Vietnam Artificial Intelligence Day. — VNA/VNS Photo

Many firms have begun to embrace artificial intelligence (AI) and the technology has enabled them to outperform their competitors, according to insiders.

Pham Quang Vinh, Head of the Enterprise Solutions Division, Viettel Cyberspace Centre, made reference to an Accenture report in June to show that 60 per cent of finance and banking firms were engaging in AI and the technology earned them 50 per cent higher revenues than their rivals.

"AI will become an official means of customer-firm interaction, especially for banks," he said.

The head of the division also said 42 per cent of specialists working at firms are unaware of the risk that their firms would fall behind the curve shoud they fail to embark on AI. In fact, AI-enabled finance and banking firms have seen their revenues rise steadily since 2019.

"AI would double in value in the next three years. It's time for firms to initiate their own data exploration," he added.

He underscored six steps for firms to incorporate AI into their operation, which involve the use of AI applications and the development of AI tests. He also mentioned the two most valuable AI use cases, which are text digitalisation and virtual assistant.

Dang Hoang Vu, Director of the AI for Business Growth Division, MoMo, remarked that AI has helped firms increase click-through rates by 16 per cent and reduce the interval of time between a search to a click by 7 per cent.

AI has also raised the volume of services accessed by users via screen by 15 per cent and advertisement requests by 6 per cent. In the finance and banking sector, firms use AI predominantly for credit scoring, approval processing and customer-need identifying.

Notably, AI-powered quick loan approval processing takes just three minutes with an approval rate of 60 per cent, about one-sixth of the time needed for the approval of other types of loans and one a a half times higher than their approval rates.

In the first six months of 2022, MoMo's quick loans grew by 260 per cent and postpaid wallets by 42 per cent. Risks associated with the former fell by 15 per cent and the latter by 64 per cent.

Do Manh Cuong, Deputy Secretary General of the Vietnam Automation Association, underscored digital firms and smart factories as a prerequisite for a digital economy.

He said Viet Nam has reached the third stage of automation, which involves the integration of digital technologies into firms' operations, including data-driven operations and AI-based smart automation.

Out of seven levels of automation, most Vietnamese firms stay between the third and the fifth levels. That means those firms are partly automated and AI integration will not be an easy task for them.

He also said Big Data and AI will be the optimal tools to run factories in the future and digital transition will help firms optimise costs and cut emissions.

Vu Hong Chien, Director of the Quy Nhon AI Research and Application Centre, FPT Software, underlined several factors that firms should be mindful of when they incorporate AI into their factories.

The factors include profitability, productivity, the readiness of the factories for AI and the compatibility of the technology to their features.

He also said digital firms and smart factories are inevitable and the latter will rely on data and cloud computing to run its operations.

Nguyen Quan, President of the Vietnam Automation Association, called for a law on national databases to lay the legal grounds for the sector. He also called for favourable policies to help firms access supportive packages more easily.

The Vietnam Artificial Intelligence Day, an annual event to promote the growth of the AI ecosystem in Viet Nam, was kicked off on Friday.

Speaking at the event, Deputy Prime Minister Vu Duc Dam highlighted the need to understand AI, spread and embrace the idea not only in the field of information technology but also in other fields.

He also said Viet Nam has a long way ahead as AI labour forces in the country are still inadequate and insufficient to meet the demand of tech firms. — VNS