Are FIEs the cause behind the increase in rising pork prices in VN? 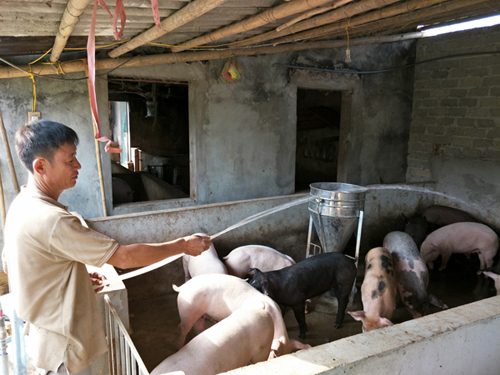 The pork price has been escalating

Tran Van Chien, director of Co Dong Livestock Cooperative in Hanoi, said there are ‘abnormal’ signs in the current price escalation which began one month ago.

There are three reasons behind the price surge. First, after the crisis period, household-run farms incurred big losses, went bankrupt and suspended farming. As a result, the number of pigs bred by households decreased by 40-50 percent

Second, the households which still farm don’t want to sell pigs at this time. They want to delay the sale, waiting for prices to increase further. As the supply has decreased, the pork price has been increasing, now trading at VND50,000 per kilogram.

Third, foreign invested enterprises (FIEs) might be behind the price escalations. “Households now don’t have pigs in large quantity to sell. As most pigs are in FIEs’ hands, they can easily raise prices,” Chien said.

Chien warned at a conference one year ago that the pig price would plunge and bounce back again, but the profit would go to FIEs’ pockets, while Vietnamese farmers would be at a disadvantage.

Co Dong is a large pig breeding cooperative in the north with 700 farms which generated thousands of jobs. However, most cooperative members have shifted to do farming for FIEs. Co Dong is now breeding 150,000 pigs, of which 130,000 belong to FIEs.

Chien said that more farms have been working for FIEs.

“If the state cannot create a reasonable policy, Vietnam’s pig breeding industry will fall into foreigners’ hands in one or two years.

“If so, the consequences will be serious. The environment will be seriously polluted. The Vietnamese households which once got rich thanks to pig farming will stop farming. Rural workers will lose jobs,” he said.

An analyst pointed out that FIEs can enjoy big preferences in land and credit access. This is discriminatory treatment between Vietnamese and FIEs which gives FIEs an advantage over Vietnamese companies.

“People can borrow money from banks without collateral if they do farming for FIEs, but they cannot do this if they farm pigs for themselves, though their assets and farming facilities are exactly the same,” he said.

“If the current unreasonable credit policy is maintained, small and medium enterprises, and households in rural areas won’t be able to develop and compete with FIEs,” he said.

VN livestock industry in danger as imports are too cheap