Are Vietnamese 'tolerating' pollution better than other countries?

That is a question posed by experts in the context of the high air pollution concentration in Vietnam.

“There are many regulations on air control and reports all say the implementation of the regulations is good. However, the environment is still polluted,” said Nguyen The Dong, former deputy general director of the Environment General Directorate at a workshop on air pollution held some days ago. 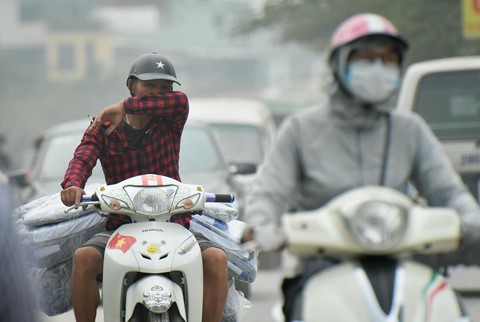 “So, the problem lies in our standards?” he asked.

At the workshop, the study titled ‘Air pollution in HCM City and policy proposals for effective air quality control for 2019-2030’ conducted by Dr Ho Quoc Bang and his co-workers was made public.

The study, according to many experts, is the most detailed work that truly reflects the air quality in HCM City.

Meanwhile, according to a research on the impact of air pollution on people’s health and the national economy implemented by Tran Ngoc Dang from the HCM City Medical and Pharmaceutical University showed that Vietnam would be able to save VND12.5 trillion if its can reduce the fine dust concentration to the WHO level.

Dang’s research found that district 8 is the area with the highest PM 2.5 concentration in HCM City, while districts 2, 7 and 9 are considered ‘relatively clean’.

The researchers predicted that the district 8 would have 42 more deaths for every 100,000 people because of air pollution. Meanwhile, the figure is just 2/100,000 in district 9.

Also expressing his concern about the increasingly polluted air, Dong raised a lot of questions about the air control.

“Why is Vietnam’s standards on air pollution concentration higher by three times than the world? Is this because Vietnamese people can better stand the pollution?” he said.

He said Vietnam’s standards need to be adjusted to be closer to the international standards.

Ho Quoc Bang, director of the Center for Air Pollution and Climate Change said some central areas in HCM City can no longer absorb some types of emissions.

According to Bang, the predicted increase in emissions by 2025 in HCM City will be nearly 40 percent (except SO2 and TSP).

HCM City now can receive 150 tons of SO2 a year for the central area and 545 tons of SO2 for suburban areas. It cannot receive more CO and NOx, or the air quality would be at a dangerous level.

The map of the current status of emissions in HCM City indicates that some regions, such as Can Gio district, have relatively low emissions. Along with that, the northeast wind blows pollution from the center to Binh Chanh district, making the air quality there quite bad despite low local emissions.