Seven more domestic and international air routes departing in Can Tho City have been launched since April, helping develop tourism, investment and trade for the entire Mekong Delta region.

On May 2, the first flight of AirAsia from Bangkok landed in Can Tho International Airport, opening one more air route among the routes connecting Vietnam’s Mekong Delta and Southeast Asian cities. 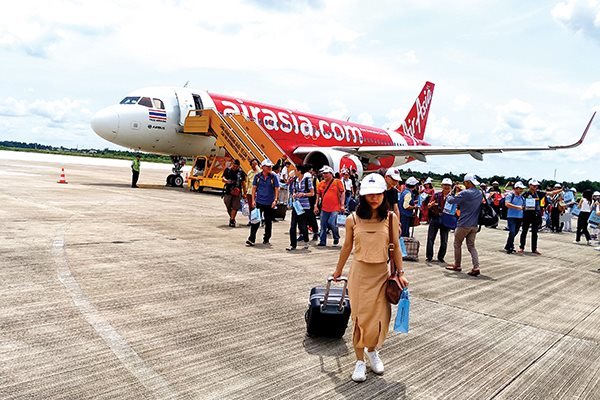 Kenny, a Thai citizen, one of 76 passengers of the first flight, said he planned to stay in Can Tho for two weeks to discover the city which he heard is beautiful.

According to Laddawan Meesupwatana from AirAsia, the Can Tho – Bangkok route, with three flights a week, will facilitate tourism for both Bangkok and Mekong Delta. The air route was launched following the Can Tho – Kuala Lumpur route in early April.

Pham Thanh Tam, director of Can Tho Airport, said by the end of April, when seven new air routes had been launched, including five domestic to Hai Phong, Vinh, Thanh Hoa, Khanh Hoa and Lam Dong, and two international to Kuala Lumpur and Bangkok, the number of flights to/from Can Tho had increased by 35 percent.

The number of passengers had increased by 29 percent and cargo transport output by 25 percent compared with the same period last year, though the five domestic routes were put into operation on April 26, while the two international routes began on April 8 and May 2.

Bamboo Airways, which has just joined the aviation market, plans to fly on Can Tho – Hai Phong after it launches the Can Tho – Hanoi route.

The flight network from Can Tho to other cities/provinces in the country has expanded rapidly. Vietnam Airlines and Vietjet Air have flights from/to Can Tho to/from Hanoi, Da Nang, Phu Quoc and Con Dao.

The Can Tho Airport is capable of receiving big aircraft with the capacity of 3-5 million passengers and 5,000 tons of cargo each year. Meanwhile, only 40 percent of capacity has been exploited.

Duong Tan Hien, deputy chair of Can Tho, said the opening of more flights from/to Can Tho is what travelers and investors want. For a long time, businesspeople have had to fly to HCMC and then spend another three hours on the road before reaching Can Tho.

According to Hien, Can Tho authorities have reserved 300 hectares of land on Vo Van Kiet Road for the development of a logistics center which will serve the increasing number of flights. It is expected that Vietjet Air will begin flying between Can Tho and destinations in South Korea and Japan this year end.