VietNamNet Bridge - China consumes 144,000 tons of pork a day, according to FAO, but Vietnamese farmers cant sell their pork to the country because of demands made by Chinese traders.

VietNamNet Bridge - China consumes 144,000 tons of pork a day, according to FAO, but Vietnamese farmers cant sell their pork to the country because of demands made by Chinese traders. This comes at a time when there is a pork oversupply in Vietnam, with prices plummeting. 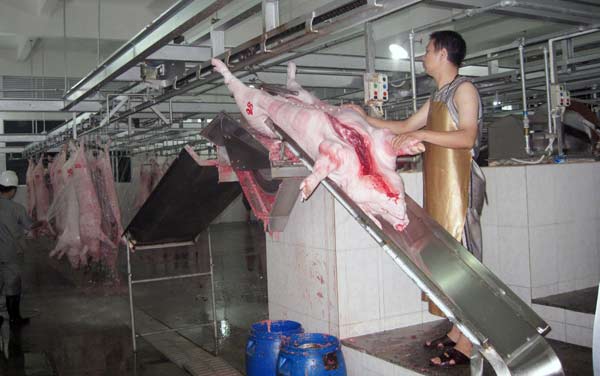 Dat Viet quoted a FAO’s report as showing that China needs 53 million tons of pork a year. At the time when China began reform in 1979, pork accounted for 92.1 percent of the ‘meat basket’ of China. The figure has fallen in recent years, but still accounts for 65.1 percent of the total demand for meat.

In 2016, it imported approximately 1 million tons, or 2 percent of the domestic pork output.

Vietnam’s pork exports through official channels remain modest, while the exports across the border gates are much higher. Live pork is exported mostly through the Chi Ma and That Khe border gates in Lang Son province, and Bac Phong Sinh – Mong Cai in Quang Ninh province.

China has high demand for pork, while Vietnam has big supply of pork. However, Vietnam now still suffers from a pork oversupply.

Dan Viet newspaper reported that in late April, two Chinese businessmen came to Binh Duong province and said they wanted to buy 2,000 pigs a day at the price of VND30,000 per kilo, which was nearly twice as much as the current price in the domestic market.

However, Vietnamese farmers said they could not satisfy the order. The problem was that the Chinese businessmen wanted the slaughtered and cut meat to be delivered in frozen containers.

The director of a livestock company in the south said after hearing about the demand from Chinese partners, he contacted slaughterhouses in Tay Ninh province for cooperation.

One of the slaughterhouses has the capacity of 2,000 pigs a day and has a HACCP certificate. However, it has only the slaughter line and nothing more. Meanwhile, Chinese clients require other utilities as well, from meat cutting, coiling, freezing to storage units.

The other slaughterhouse in Cu Chi district in HCMC was even worse. Though it had higher capacity of 4,000 pigs a day, all the work there was done manually.

Meanwhile, the Ministry of Agriculture and Rural Development (MARD) warns that the Chinese market is unstable. Sometimes it imports meat in large quantities, but it suddenly stops imports later.