Chinese travelers’ payment transactions are made with Chinese cards at Chinese POS machines illegally installed in Vietnam and do not go through Vietnam’s banking system.

VietNamNet Bridge - Chinese travelers’ payment transactions are made with Chinese cards at Chinese POS machines illegally installed in Vietnam and do not go through Vietnam’s banking system, according to the head of the Quang Ninh provincial Market Control Sub-department Cao Xuan Luat. 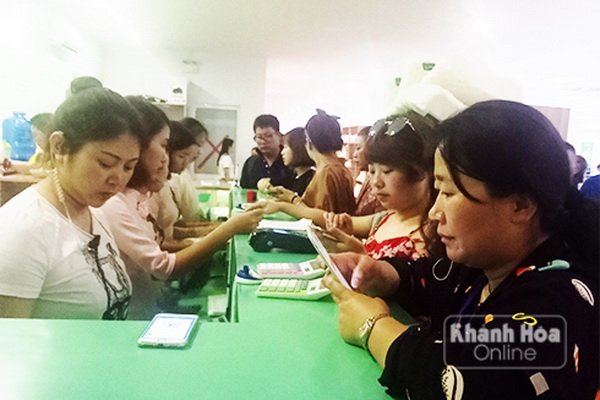 
Luat said at a conference that Chinese travelers have been flocking to Quang Ninh in recent years. However, most of them go under ‘zero dong tours’, i.e. they come to Quang Ninh and then travel to other localities and do not have to pay dong in Vietnam.

Quang Ninh received over 7 million travelers in the first six months of the year, including 2.5 million foreign travelers.

A banking expert pointed out that when Chinese buy goods in Vietnam and make payment with Chinese cards to transfer money back to China, it is an illegal payment mode which must be prevented.

Local newspapers have repeatedly rung the alarm bell over the illegal installation of POS machines at the shops specializing in receiving Chinese travelers in Vietnamese territory. The machines, connecting with Chinese banks, transfer the money to China.

The illegal behavior not only causes a big loss to the state budget because Vietnam fails to collect tax, but also disables domestic payment in the country.

In principle, though market control officers discover the behaviour, they do not have the power to make decisions on imposing fines. Only SBV has jurisdiction in imposing fines in the monetary sector.

If state management agencies cannot cooperate, the fine will fail.

The illegal behavior can also be seen in Da Nang and Nha Trang, the favorite destinations for Chinese travelers.

The representative of the Da Nang City’s Market Control Agency confirmed that Chinese travelers now tend to make payment online (via POS or e-wallet) for goods.

The problem is that the agency’s officers cannot be present at ‘hotspots’ 24/7 to supervise the transactions.

Lawyer Tran Dinh Dung calls this behavior ‘infringement of Vietnam’s monetary sovereignty’, which must be stopped to prevent harm to the national economy.


Luat said the market control agency has been asked to strengthen inspection and supervision, but it’s unclear what to ‘inspect’ and ‘supervise’.

According to the Vietnam National Administration of Tourism (VNAT), 1.7 million out of 5.5 million foreign travelers to Vietnam in the first four months were Chinese