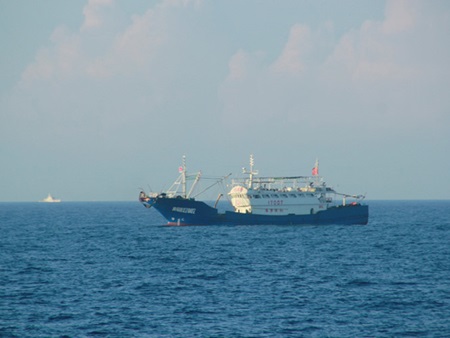 At the meeting yesterday, Phuc also said China often sustained operation of military and legal enforcement ships, and air planes to chase and capture Vietnamese fishing ships in the sea of Viet Nam.

The colonel said military and legal enforcement (Coast Guard) ships of China even blocked all rescue action of Vietnamese maritime rescue ships in providing rescue service for Vietnamese fishing ships in the sea of Viet Nam.

He said China sped up illegal large-scale construction and the transformation of islands and reefs in Hoang Sa (Paracels) Islands of Viet Nam with an intention of building up an Air Defence Identification Zone (ADIZ) in the sea of Viet Nam.

At the meeting, the city's Border Guard Force reported that there were 64 incidents in the sea in 2015, of which six ships were sunk and 10 were collided with.

The report said six fishermen died from accidents or drowned while working at sea.

Last week, a fishing vessel from Quang Ngai Province was hit by an unidentified ship in the sea of Quang Tri Province of Viet Nam.

In 2014, a fishing trawler DNa TS 90152 from Da Nang was rammed by Chinese ships in Vietnamese waters off the Hoang Sa (Paracel) Archipelago.