The battle against elephant tusk traffickers remains difficult as the violators are protected by corrupt officials who take bribes.

Many drastic measures have been taken over the years to eliminate ivory trafficking rings, but the achievements have been modest. Vietnam remains one of the hottest elephant ivory spots in the world. The efforts by investigators and legal enforcement agencies have met barriers due to corruption. 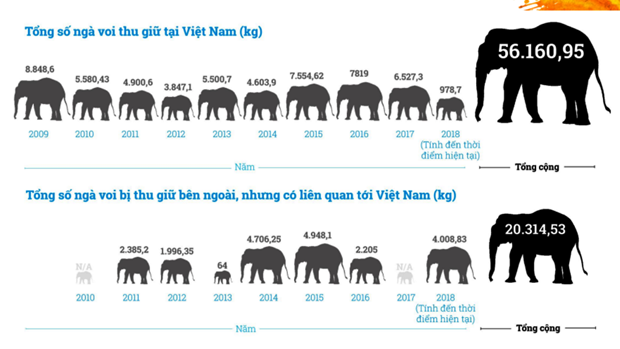 The amount of elephant ivories seized in Vietnam (in kilogram)

According to Bui Thi Ha, deputy director of ENV (Education of Nature Vietnam), agencies can only seize exhibits, or ivory, when discovering illegal trafficking, but they cannot punish subjects of trafficking. In many cases, it is impossible to find the owners of goods, or the leaders of trafficking rings. Most consignments of ivory do not show the origin.

Elephant tusks are usually found while being transported, while the carriers – motorbike or truck drivers – deny the responsibility, saying that they are just providing transport service for a fee, and do not know the real owners of the goods.

However, Ha stressed that in these cases, motorbike and truck drivers must be considered as accessories to crimes and must be punished.

Sharing the same view, Le Van Minh from the Wildlife Conservation Society (WCS), said: “A study by WWF/Dalberg 2012 pointed out that wildlife poaching is strong in the areas where corruption is rampant, while legal enforcement is weak.”

He said traffickers give bribes to agency officials, so they turn a deaf ear to counterfeit documents and let traffickers illegally carry elephant ivory across border gates.

“It is the state officials’ behavior of lending a hand to traffickers which causes the trafficking to escalate,” he said.

A WCS report showed that, in 2013-2017, Vietnam's law enforcement agencies handled 48 violations, seizing 9,732 kilograms of elephant related exhibits, which accounted for 23.55 percent of the total amount of wild animals seized.

Of the elephant-related exhibits, 89.95 percent were elephant tusks, while the remaining were manipulated products (rings and bracelets).

Vuong Tien Manh, CITES Vietnam director, showed a document to prove that in the last 10 years, illegal wildlife trafficking has never decreased. Thousands or tens of thousands of objects are seized each year.

Most of the large consignments of ivory are from Africa. They are carried via many countries before reaching Vietnam and China. However, it is difficult for countries and agencies to join forces to arrest the traffickers because information is not shared.

The customs of the central city of Da Nang has discovered and detained a large amount of goods suspected to be elephant tusks.