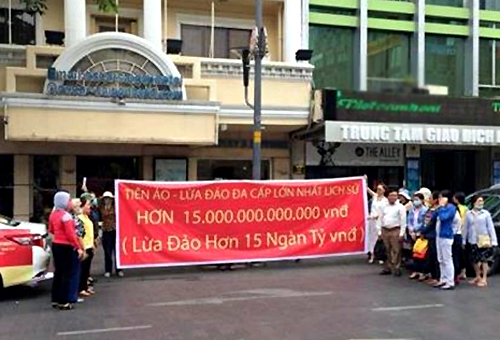 Alos Coin (AOC) became a hot topic of discussion in Bac Giang Province in late 2017. The cryptocurrency caught the attention of people in the poor rural area because it was believed to help them escape poverty quickly.

The promised interest rate of 180 percent per annum, or 20 times higher than the bank deposit interest rate, prompted thousands of locals to sell their assets and houses to invest in AOC.

Only when the leaders of the system disappeared were their true faces exposed.

The police discovered that the cryptocurrency ring had networks in 10 provinces/cities and attracted 1,400 investors who had poured tens of billion of dong into it.

In April, tens of investors came to the head office of Modern Tech Company, holding a banner denouncing the company for appropriating VND15 trillion by calling for investments in Ifan, or Pincoin cryptocurrency.

With more sophisticated tricks than AOC, iFan, or Pincoin, defrauded investors who have IT knowledge. The cryptocurrency was introduced as an ‘international currency’ established in Singapore and used for showbiz-related services.

Some investors revealed that Modern Tech had an interest rate of 48 percent a month at minimum.  It also promised at events organized in 2017 to give capital back within four months. If investors could bring new investors to the system, they would get a bonus equal to 8 percent of the total value of the new investments.

Like other cryptocurrencies set up on the lending platform, iFan collapsed a short time later.

Sky Mining is also on the list of discovered cryptocurrency fraud cases.

On July 23, investors pouring money into Sky Mining reported the case to agencies after they failed to contact the cooperative’s director Le Minh Tam.

According to Le Minh Hieu, vice director of Sky Mining, Tamleft for the US with assets worth tens of million of dollars, and Hieu was just a nominal manager and did not have information about investors and invested money.

On its website, Sky Mining says it is Vietnam’s largest cryptocurrency mining company.

Sky Mining asked investors to choose packages of either $100 or $5,000 used to buy mining machines. It promised to give back principal and interest, worth up to 300 percent of the investment capital, after 12 months.

After paying money, investors would receive mining machines from Sky Mining and leave them at the company for mining. After 15-18 months, when the 300 percent profit cycle finished, investors return the miners to the company.

Vietnamese interest in bitcoin in top 5 among global trading floors