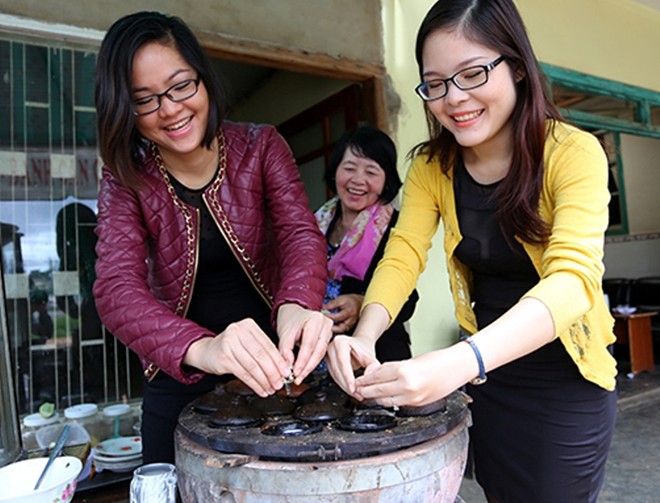 Ha Huyen (left) and Ha Uyen learn how to make banh can (can cake) in Da Lat.

After years of study in Singapore, Germany, Japan, and Australia, the two sisters born in the central city of Da Nang, Le Ha Huyen (Helen Le, 30) and Le Ha Uyen (Summer, 26), decided to spend time promoting  the special dishes of Da Nang and other areas of Vietnam to international friends.

Ha Uyen is also the owner of the website danangcuisine.com with about 20,000 hits per day.

While studying business administration at the University of Asia Pacific (Japan) in 2009, Ha Uyen was often asked by her foreign friends "What are Vietnam’s unique dishes?" and "What are the delicious dishes of Da Nang?"

At that time, there was almost no website in English about Vietnamese dishes. Ha Uyen emailed her sister - Ha Huyen – who was studying MSc at the University of Hamburg (Germany) to discuss the making of a website on Vietnamese food.

During her five years studying overseas, Ha Huyen was also asked similar questions by her friends. Therefore the two sisters decided to design a website promoting Vietnam cuisine, firstly the food of their hometown - Da Nang.

Ha Uyen, who has good English language skills, opened a blog, which became a website in 2011, writing comments about Da Nang’s cuisines and recommending popular restaurants, many of which did not even have a name, where these dishes were offered.

In 2011, Ha Huyen joined her sister by opening a YouTube channel, where she posts video clips guiding foreign viewers how to cook these dishes.

"Find the lost part of my life"

“We mainly process simple dishes so foreigners can cook them. But sometimes we make sophisticated dishes to make the show more interesting," Uyen said.

From early 2014, the sisters began earning advertising revenue from their channel and website. Previously they maintained these addresses with their own money.

Huyen and Uyen recalled the stories, which are the driving force for them to maintain their YouTube channel and website.

Adele Hoang Diep, a 16-year-old Vietnamese-born girl in the U.S. who was adopted at birth, emailed Ha Huyen in 2012: "I feel like a part of my life is a secret. I had tried to find the relationship with my home country but I still could not find it. Fortunately, since I knew your channel.  I feel very comfortable like I’ve found the lost part of my life."

A Korean girl whose husband is a Vietnamese wrote to Huyen and Uyen: "The relationship between me and my mother-in-law was not good, perhaps due to cultural differences. But since I was guided by you to cook Vietnamese cuisine, the relationship between us has got better. We watched your video clips and cooked together. I feel the cultural differences can be resolved by dishes."

The sincere emails moved the sisters and became a driving force behind their desire to maintain their Youtube channel and website.

Uyen has returned to Vietnam. Through the Internet, many more foreign tourists know about Uyen and Huyen. To increase interaction with the viewers and to have money to maintain their channel, Uyen has offered a tour to Da Nang to enjoy the city’s special cuisine.

After work, Uyen takes foreign visitors to sidewalk restaurants in Da Nang. "My mission is not to make diners think the food is so delicious but to understand the interesting story behind the dishes," Uyen said.

Recently, an Australian visitor showed Uyen newspaper articles that had included the addresses of restaurants in Da Nang. He said: "I come to Da Nang very often and it is not difficult to find these restaurants but I would like to hear stories about Vietnamese cuisine from you".

Uyen took the Australian man to a sidewalk restaurant that served steamed glutinous rice  and chicken and told him the story behind the cuisine: the Vietnamese always honor the ancestors and they offer steamed glutinous rice and chicken to their ancestors. Uyen also told foreign visitors about the stories behind other dishes like banh beo, banh chen, banh nam and others.

Uyen said she had to read a lot of books and meet with older people to listen to their stories about Vietnamese food.

Ha Huyen works in Germany but every year she spends all of her holiday in Vietnam to film Vietnamese food. Ha Huyen is now in Vietnam to prepare materials for a guidebook for foreigners on Vietnamese cuisine.

Huyen said: "I want to attract international friends to Vietnam by helping them understand the food of Da Nang and Vietnam".