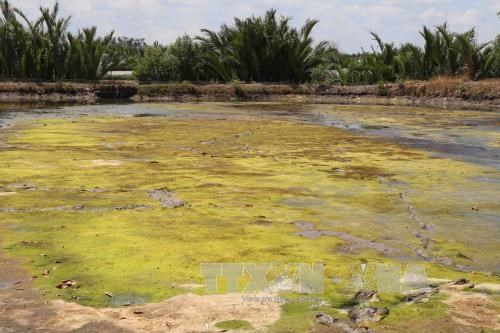 A deserted shrimp farming in Ca Mau due to seawater intrusion.

The added supply can only ease part of the demand for irrigational water in the lower-river nations, Phan told a Vietnam News Agency reporter in Vientiane on March 23. He explained that the severe situation is mainly caused by the impacts of greenhouse effects and lack of rain.

The water level of the Mekong River in Laos’ Vientiane rose to 2.04 metres on March 21, a one metre rise after China released water upriver, the MRC official said.

Referring to Thailand’s installation of pump systems to take water from the Mekong River to supply for the country’s northeast region, Phan said the pumping, which is in a trial period, doesn’t affect the river water level.

However, with respect to the country plan’s to deploy a permanent system with a capacity of 150 cubic metres of water per second, the MRC has requested the Thailand Mekong Committee to consider conducting consultation process with relevant bodies in line with the Mekong River Agreement, Phan said.

The Commission also called on its member nations, namely Thailand, Laos, Cambodia and Vietnam, along with Myanmar which is yet to be a MRC member to use the river’s water resources in a sustainable manner.

Drought and salinisation have seriously affected the lives of people in 10 out of Vietnam’s 13 Mekong Delta provinces, with nearly 160,000 hectares of rice damaged and destroyed by the phenomenon since the end of last year.

In reply, the Chinese side has been releasing water from its Jinghong hydropower plant in Yunnan province since March 15.