Educators pessimistic about ‘one curriculum, many textbooks’ program

VietNamNet Bridge - The government in 2015 approved a plan on reforming curricula and textbooks for general education, emphasizing a student-centered approach which aims to promote initiative, creativity and self-study.

VietNamNet Bridge - The government in 2015 approved a plan on reforming curricula and textbooks for general education, emphasizing a student-centered approach which aims to promote initiative, creativity and self-study, as well as interactivity between teachers and students during learning activities. 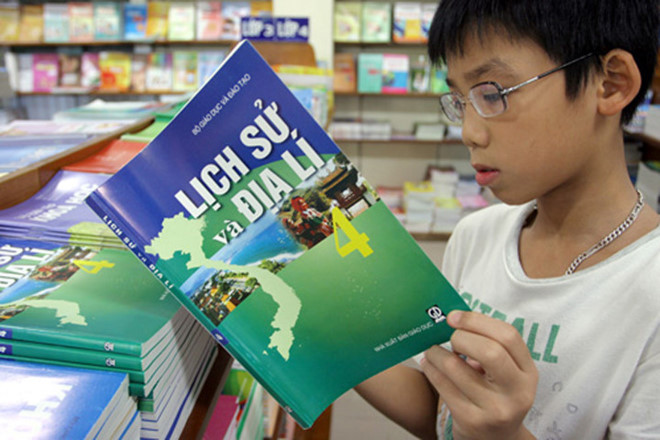 Under the plan, the new curricula and textbooks would be used in the 2018-2019 academic year.

However, the slow implementation of the phases of the plan has caused educators to believe that textbooks may not be ready for the next academic year.

“Which publisher will dare to invest big money on textbook compilation projects? Who will pay this money if the drafts of textbooks are rejected by censors? I dare not dream of the ‘one curriculum, many sets of textbooks’ program,” said a university lecturer in Hanoi.

Only by August 2017 had MOET approved the draft education program for general education. It was expected that the programs for subjects would come out in September, to be followed by textbook compilation and teacher training.

As such, educators only have 12 months more to fulfill all the work to activate the new curricula in the 2018-2019 academic year.

Experts fear that 12 months is not enough to obtain high-quality textbooks.

“I can say for sure that with such a short time, the program compilation committee won’t be able to fulfill all the work well, especially the textbook compilation,” said Van Nhu Cuong, a renowned educator.

“If the compilers race to work on textbooks, the quality will be problematic,” he said, suggesting that it would be better to delay the application of the new curricula and textbooks.

Nguyen Minh Thuyet, chief editor of the framework program for general education, told Infonet that while waiting for the decision from MOET and the government, the compilation committee still had to work at full capacity to put the new curricula and textbooks into use, as initially scheduled.

Thuyet said if they delayed the application of new curricula by one year, MOET would have more time to train teachers, and institutions and individuals more time to compile textbooks.

This would ensure fair competition among compilers, an important factor that would ensure the success of the ‘one curriculum, many sets of textbooks’ program.

Meanwhile, a lecturer at the Hanoi University of Education, who declined to be named, said he doubted the feasibility of the ‘one curriculum, many sets of textbooks’ program.

He thinks that publishing houses do not want to spend big money to organize textbook compilation. “What will happen if the drafts of the textbooks are rejected?” he asked.

VNEN documents to be developed into official textbooks