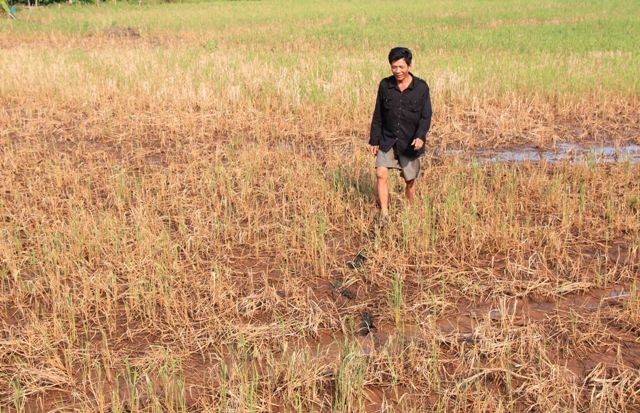 On March 10, Mr. Tran Trung Hien - Director of the Tra Vinh Agriculture and Rural Development - said the reserve water in the field dropped to 0.25 to 0.6 m. The salinity in the main canals fluctuated between 1.5 and 2 ‰ and it was even higher in the smaller canals.

It is forecast that by the end of April 2016, Tra Vinh will be in serious shortage of water for agriculture.

This winter-spring crop, Tra Vinh has about 23,690 hectares of damaged rice, mainly in the districts of Tra Cu, Cau Ngang, Tieu Can, Chau Thanh, Duyen Hai and Tra Vinh city.

More than 366 hectares of prawn lakes of people in the district of Cau Ngang, Duyen Hai and Duyen Hai town were harmed. The sudden rising of salinity also affected over 1.38 hectares of snakehead fish ponds.

Because of saline intrusion, nearly 10,000 households have to use saline water, Hien said.

In Vinh Long, the salinity measured in the Co Chien River was up to the record high of 8-9 ‰. About 1,000 hectares of winter-spring rice were affected. Twelve water supply stations could not operate due to salinity, affecting 18,000 households.

The local authorities are taking drastic measures to cope with drought and saline water intrusion.

At a meeting held in Can Tho on March 7, the Minister of Agriculture and Rural Development (MARD) Cao Duc Phat said the record drought in 100 years has hit nine out of 13 provinces in the Mekong Delta. The Prime Minister has agreed to grant VND137 billion ($6 million) to the drought-hit locations.

According to MARD, the total area of rice hit by drought and salinity is 139,000 hectares while the forest fire risk has reached level 4-5 (extremely dangerous). Up to 155,000 households (approximately 575,000 people) now lack water.

The south central coast province of Binh Thuan has declared a state of natural disaster in the 2015 – 2016 winter-spring crop as drought is taking a heavy toll on local agriculture.

In this winter-spring crop, the province only has enough water reserves to irrigate 18,700ha of rice, down more than 15,000ha from the previous year. About 50ha of rice have already been ruined, while over 450ha of rice and other crops in Duc Linh and Ham Tan districts are experiencing serious water shortages.

Some water supply facilities in Ham Tan and Tanh Linh districts have had to suspended operations due to a lack of water. Meanwhile, about 90,000 families in Binh Thuan are also lacking water for daily use.

The water stored at irrigation works province-wide is now estimated at 87 million cu.m., which is only about 40 percent of the total design capacity.

Binh Thuan reviewed the cultivation schedule and replaced 1,300ha of rice with short-term crops such as maize, vegetables and different types of bean. It also encouraged residents to dredge canals and save water during irrigation.

However, if drought lingers, about 200ha of cassava in Ham Tan, 3,000ha of rice in mountainous communes of Ta Linh, and a widespread area of perennial trees like rubber, dragon fruit, pepper and cashew will be severely affected, according to the province’s sub-department for water resources.

Provincial authorities have asked the Prime Minister to allocate over 106 billion VND (4.77 million USD) from the State budget for addressing drought./VNA