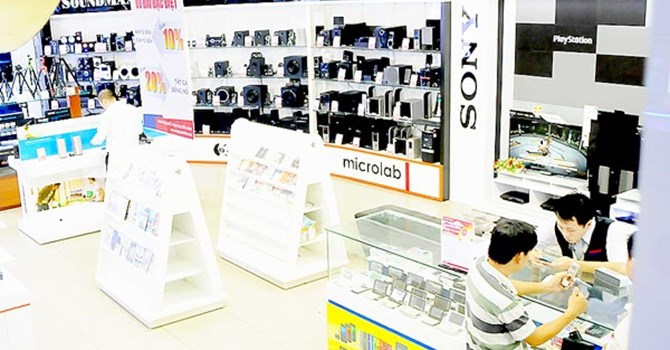 Though nearly all big brands have been present in Vietnam, foreign investors still believe the domestic electronics and refrigerator market still has not been fully exploited.

A report of GfK Vietnam, a market survey firm, showed that the considerable improvement in the income per capita and significant reduction in the unemployment rate would lead to the increase of household spending, especially on electric & electronic appliances.

The income per capita has increased to $2,109 per annum, while the unemployment rate has reduced to 2.31 percent.

The inflation rate has been curbed at 0.63 percent, while the GDP growth rate is expected to reach 6.68 percent in 2016.

Of the total spending of VND60 trillion predicted for electronics, Vietnamese may spend mostly on mobile phones, laptops and tablets. As for refrigeration products, expected to be worth VND97 trillion, people would spend on air conditioners and refrigerators.

Dang Tran Hai Dang, deputy director of ViettinbakSc Research Center, said under free trade agreements, Vietnam has to cut import tariffs on many categories of products, which would pave the way for more electronics and refrigeration products to enter Vietnam.

While domestic demand for the products increases rapidly, retail networks are developed mostly by big conglomerates and only exist in large cities.

A survey by ViettinbankSc showed that 30 percent of mobile phones are distributed by The Gioi Di Dong, the largest computing device distribution chain.

The other 10 percent is distributed by FPT Shop, 20 percent by local shops and home appliance distribution centers, and the remaining 40 percent by small shop chains.

As such, modern retail chains in Vietnam now can hold 25 percent of the market share, lower than the 33-60 percent in other regional countries. This, in the eyes of analysts, means that there is still large room in the Vietnamese retail market.