'Farm rescue' campaigns are on the way out 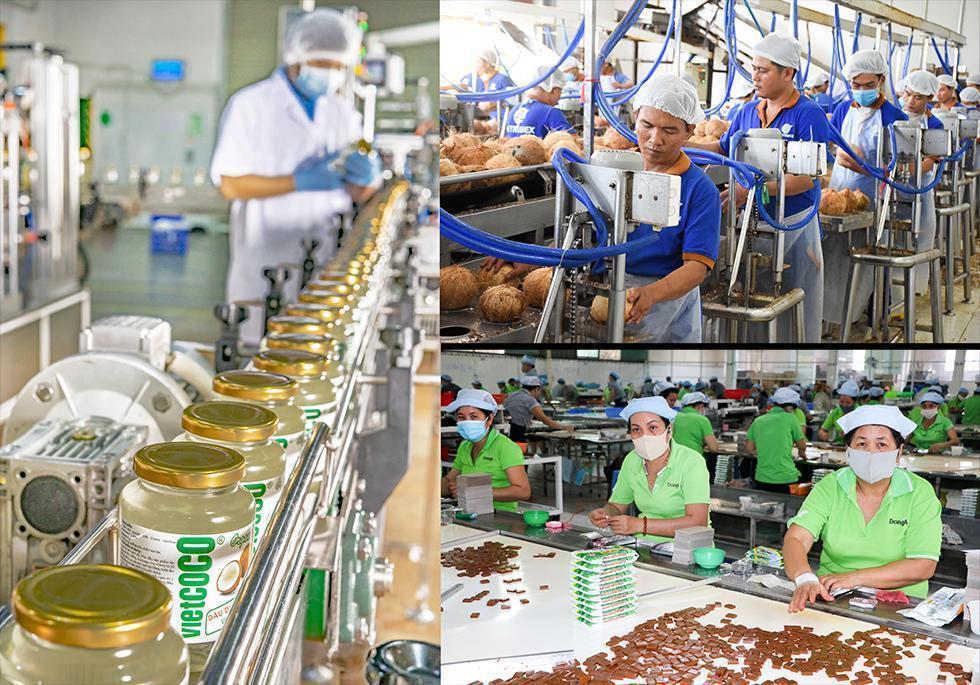 In April 2021, A Chau Food JSC opened its vegetable and fruit processing plant in Muong Khuong, the ‘pineapple and banana metropolis’ in Lao Cai province. The event helped ‘change the fate’ of the land, where there are 1,200 hectares of pineapples and 1,800 hectares of bananas.

About 4,600 tons of canned pineapple, 1,600 tons of pineapple juice concentrate, 800 tons of dried bananas, 1,000 tons of sweet corn and 250 tons of vegetables will be produced there every year.

There are also 200 farm production chains taking shape in the province, which provide materials to processing plants.

In Ben Tre, coconut is not only sold as fresh fruit and used to make candies or activated carbon, but also to make next-generation processed products.

In the province with 73,000 hectares of coconut growing area, the coconut processing industry is taking shape. As many as 150 products are made of coconut and are exported to many markets, including choosy markets like US, Canada and Australia.

In 2020, coconut and coconut-made products brought turnover of VND5.88 trillion to the province, including export turnover of $346.91 million.

Ben Tre has developed a modern processing industry which puts out competitive products from coconut. The enterprises in the province have large scale and use advanced technologies.

With its great advantages, Ben Tre is striving for $1 billion worth of turnover from coconut products. Ben Tre farmers never have to call on people to ‘rescue’ their coconuts because of oversupply, and even import materials from other countries for domestic processing.

As for Muong Khuong, thousands of households there will change their production mode because of the processing plant in the locality.

Building processing plants in material growing areas to create farm production chains as in Muong Khuong has been seen in many provinces, but the number of such plants is still modest.

This explains why farmers are unhappy when they have bountiful crops, and why they still have to call for help to buy farm produce.

Son La, considered a poor province, has emerged as a ‘phenomenon’ in the last five years. From a province which only grew maize and cassava, Son La has become the second largest fruit production center of the country and the largest fruit processing center in the northeast.

In 2020, when the Covid-19 pandemic broke out and disrupted the distribution chain, Son La’s products still sold well, which brought a stable income to farmers.

Former Minister of Agriculture and Rural Development Nguyen Xuan Cuong predicted that by developing production chains and organizing deep processing of farm produce, Son La will be able to earn $1 billion a year from farm exports after a short time.

Developing production areas in association with deep processing will not only help stop the oversupply, but also create higher added value.

Nguyen Lam Vien, chair of Vinamit, a well known dried fruit producer, said the gap in profits can be seen in the material section phase. Processing plants don’t need to choose expensive fruits with beautiful appearance, but just use fruits with low prices.

The products that don’t have good appearance cannot be exported as fresh fruits, but can be used for processing if they have high quality. Therefore, processed products can bring higher profits.

According to MARD, Vietnam’s vegetable and fruit export turnover has increased from hundreds of millions of dollars to billions of dollars. In 2020, the country earned $3.26 billion despite Covid-19.

However, only 8-10 percent of vegetables and fruits are used for processing.

Under the plan on developing farm produce processing in 2021-2030, Vietnam aims to export $8-10 billion worth of vegetables and fruits a year, 30 percent of which would be from processed exports.