Nguyen Phuc Minh Khang, a fifth grader at Dich Vong A Primary School in Cau Giay district in Hanoi, loves creativity and discoveries. Like many other children of the same age, Minh Khang likes video games. 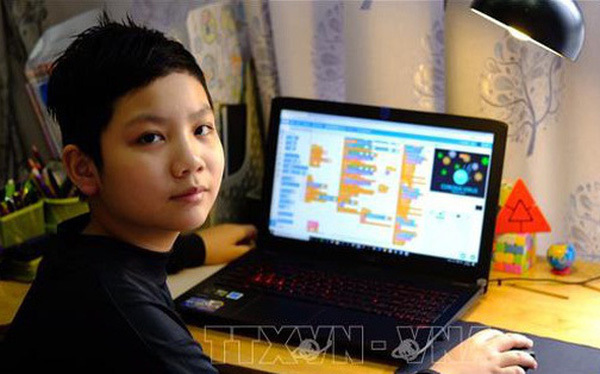 Realizing that their son has a love for electronic games, his parents told Khang to register for membership at the Informatics Club of Dich Vong A Primary School when he entered the third grade.

Khang regularly accesses the internet to learn how to create games from Youtube videos, and then designs games himself.

Many games with eye-catching graphics and colors that are easy to play have been designed by Khang with the family's computer.

Khang’s ‘store’ now has 10 games, including completed and unfinished ones.

His mother, Le Thi Thu Trang, said Khang is a playful boy but has a sense of discipline. He designs games after he finishes his daily learning. He also helps his mother do housework in free time.

Recently, Khang and his mother made respiratory droplet-prevention screens to prevent the spread of coronavirus.

Encouraging his study and creativity, Trang advised her son to create games instead of playing games created by others.

In the last 10 days, Khang has been working on games with the message ‘defeating coronavirus’. The games have a simple interface so that small children can also play.

The boy said he designed the games after learning on internet and ‘consulting’ with his parents about the ideas.

Regarding the technical design, Khang follows what he has learned from the internet. He also receives encouragement and instructions from his father, who is a graphic designer.

Ngo Quoc Huy and Nguyen Tan Tien, two students of the Hue High School for the Gifted in Hue City, have created an automatic hand sanitizer and given it to the Hue City Central Hospital.

The machine has components that are easy to find and reasonably priced, such as infrared sensors, electric pump, solenoid valve and water pipe.

When users put their hands in, the machine will automatically emit 1.5 ml of disinfectant solution for 3 seconds in mist-spraying form. It has a small size, consumes very little power, and has reasonable production cost.

A group of students from the HCM City Economics and Laws University has found a method to reduce motorcycle emissions by raising an algae species.

Many universities in HCM City plan to provide scholarships to students whose families’ livelihoods have been affected by the COVID-19 pandemic or who live in the Mekong Delta and are affected by drought and saltwater intrusion.