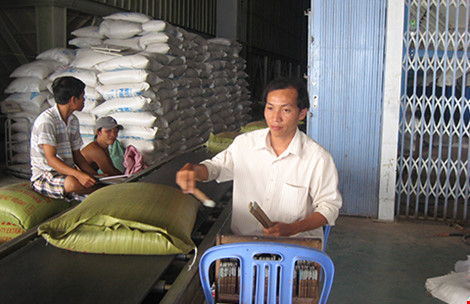 Dinh Minh Tam from Co May, a private enterprise in Dong Thap province, said that the requirements stipulated in the decree were too high for small and medium rice exporters.

In order to be eligible, export companies must have storehouses that can contain 5,000 tons of rice, and a husking workshop with minimum capacity of 10 tons per hour.

Tam, affirming that very few companies can meet the requirements, said he ‘has to take a detour’ to continue exporting rice.

“We have to export rice through a large company in Can Tho City, and of course, we have to pay fee for the export authorization, VND40 per kilo of exports,” he said.

However, a service fee is not the only thing he worries about. More importantly, he fears he may have to disclose business information and lose customers and markets.

Also according to Tam, he has set up a Co May import company in Singapore which imports Co May’s rice through the authorized exporter. From the subsidiary in Singapore, rice products are brought to retail chains in the country.

As such, Co May has to follow a roundabout route to sell rice overseas, accepting to pay many additional expenses, including expenses to operate a company in Singapore. Meanwhile, if Co May exports rice directly from Vietnam, it would not have to pay the expenses.

Co May is not alone. Many enterprises said they want to export rice under Vietnamese brands so as to increase the value of the Vietnamese rice, but they cannot get export licenses because they cannot satisfy the requirements set by Decree 109.

Khai said he once received a big order from Russia, but he could not obtain the license for export. After a lot of complaints, the company was granted a special mechanism which allowed him to export the rice. However, he has to apply for the license every year.

Nguyen Phuc Anh, director of Tan Tai III, said the company had to stop rice export after the decree was released because it could not arrange such a huge amount of money to build a large storehouse. The company now focuses on the domestic market.

Vo Tong Xuan, a leading rice expert, believes that it is necessary to set up specific policies to encourage small and medium enterprises to export specialty and fragrant rice.