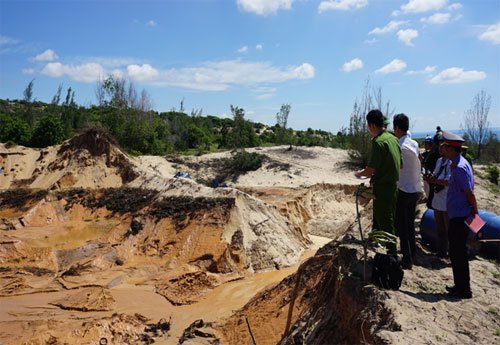 The incident, one of a series of similar incidents, has raised worries about the ‘red mud danger’.

Nguyen Thanh Son, a renowned expert from the Vietnam Coal and Mineral Industries Group (Vinacomin), said the waste sludge from titanium exploitation is less hazardous than sludge from bauxite exploitation, but it is also harmful to people’s lives .

Dang Hung Vo, former Deputy Minister of Natural Resources and the Environment, attributed the incidents to the exploiters’ irresponsibility, saying that the red mud reservoirs could not meet the standards. Meanwhile, state management agencies are still poor at supervising the project implementation to ensure enforcement of the laws.

Vo pointed out that red mud reservoir incidents will cause serious consequences to the environment and affect agriculture production, even if investors pay big money to repair the damages.

Therefore, it is necessary to set up a reasonable management mechanism to be sure that reservoirs will not break down.

“More similar incidents would happen in the future, if the management and inspection cannot be implemented well,” he said. “If necessary, the agencies which cannot fulfill their tasks must be disciplined or face criminal prosecution "

The expert emphasized that exploiters must not only be fined for the environmental incidents, but also forced to spend money to fix problems.

“At present, no one knows if the fine paid by enterprises would be used to repair damages to the environment,” he explained.

“It would be better to reserve the ore for the next generations to use when necessary. As for licensed projects, it is necessary to strengthen the inspection to minimize risks,” Vo said.

Meanwhile, Son from Vinacomin thinks it would be better not to license titanium exploitation projects after so many red mud reservoirs incidents.

Son went on to say that the titanium price has been decreasing in the world market. With the low prices, the profit Vietnam can expect from titanium exploitation is not high enough to compensate for damages to the environment.

“We could think of resuming titanium exploitation in five or 10 years, when the prices go up,” he said.